Today Bridget and I woke up super early so that we could put a mini birthday cake on our friend’s door step, ring the doorbell and then run like hell… Happy Birthday Amanda!

Because of our early morning shenanigans I wasn’t sure if I was going to make it in time for spin class. After I dropped Bridget off at school and headed home to change I looked back to see that Penelope had fallen asleep in the car. So I thought for sure that I was going to have to go to yoga instead after she woke up. Well, the nap didn’t last so I hauled ass to get to the gym on time.

In my haste, I forgot my padded gel seat. When I first sat down on that tiny hard seat the first thought that came to mind was… “No wonder Lance lost a testicle.” 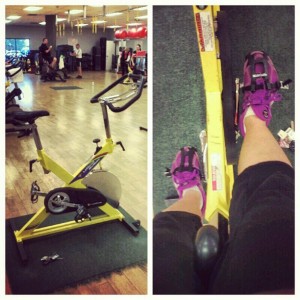 The point is, even though I forgot my gel seat the class wasn’t that bad. I found out that if you increase the resistance there is less bouncing which “Lady” appreciates. My quads however, weren’t too impressed.

As I gingerly got out of the saddle I expected my body to scream at me for the abuse I put it through. But I felt fine, not even a wobble as I made my way to the daycare to pick Penelope up. I thought for sure there would be some repercussions but there weren’t any.

Then I started to worry… Is my vagina getting tough? (Sorry… “Lady”)

Brent’s Street Tacos are the most magical tacos you will ever eat. When I was pregnant I wouldn’t eat meat. I couldn’t bring myself to eat anything other than crackers. Brent was really worried and made me these tacos in an attempt at getting some iron in my system… It worked.

These tacos are all over the map. They’re tangy, chewy and creamy all at once. Give these a try and you will be in taco heaven.

Now just as a warning there aren’t any real measurements because he just made it up as he went. You kind of have to go by taste.

fresh salsa (from the produce section)

Brown the meat and season with chili powder until browned. (There is no need for added salt because Frank’s is salty enough.)Drain the meat and return to heat. Add about a half of a cup of salsa give or take depending on taste. Then add lots of Frank’s Red Hot. Just a few dashes won’t do it. It adds a zing to the meat that at first might seem a bit overwhelming, but when you add the toppings the flavors are perfectly balanced.

In another skillet toast the corn tortillas until chewy but not crunchy. Top the tortillas with meat, cheese, cilantro, avocado and then give a generous squeeze of lime on top.

You will never go back to the taco packets in the seasoning isle again!