Today started at 4:50 this morning because Penelope woke up and decided that night-time was overrated.

This was okay with Brent and I because the day before Scout, our dog, was acting really strange. I thought he was poisoned some how because every time he got up from his bed it took all of the strength he had. He acted like he was 90 in dog years when normally he’s got the obnoxious energy of a pup. Brent tried to act all “tough guy” the night before when I rambled on about how worried I was. He acted like I was such a dork for being so worried. However, he was the first one out of bed this morning to go check to see if Scout was doing any better.

To our surprise his eyes were almost swollen shut and goopy. It was so sad, he couldn’t even find the Cheerios underneath Penelope’s high chair.

I felt so bad for him that I bent down to pick up the Cheerios off of the floor and fed them to him by hand.

Needless to say, Brent took him in to the vet’s office as soon as he could. He spent three hours there while they did blood work and other tests to see what was wrong with him.

Five hundred dollars later we found out that he has some sort of infection and they gave us the medication to take care of it. I should just call him Granny Scout because he needs more meds than an old lady.

While Brent was at the vet’s office I was at home cuddling with Penelope who was particularly playful today. I kind of felt bad having fun while Brent was stuck at the vet so I decided to make tomato soup… his favorite.

The only problem is that I don’t like canned tomato soup. We’ve already established that I’m kind of bratty and I just don’t do what I don’t like. So instead I decided to try a from scratch roasted tomato soup recipe. I figured I could roast the tomatoes in the morning while I watched the latest episode of The Taste.

I seasoned the tomatoes with salt, pepper and drizzled them with some olive oil and popped them in the oven at 400 degrees for 50 minutes. Oh and I also wrapped a few garlic cloves in foil and let those roast too.

I don’t know what it is about me and cooking shows but I love them. This may stem from my childhood. My dad confessed to having a huge crush on Nigella Lawson from Nigella Bites. I think this may have been what drew me to The Taste in the first place since she’s on it. My personal favorite celebrity chefs are Ina Garten and Giada De Laurentiis. Brent and the guys at the fire house are huge fans of Giada too. Apparently they really appreciate the way she zests those lemons.

While I watched my show I could smell how delicious this was going to be. There is no explaining how yummy the tomatoes and garlic smelled once pulverized in my food processor.

I couldn’t wait to use the latest addition to my kitchen “herb garden”… basil. Isn’t she a beauty? I didn’t even know I liked basil until I walked past this sucker at the store to find that the smell of it made my mouth water.

This was intended for dinner so I put the roasted tomatoes in the refrigerator until I was ready to make the soup.

It snowed all day long and I couldn’t wait to take Bridget sledding for the first time since before I was pregnant with Penelope. I decided that sledding was going to be my workout for the day after the torture Brent put me through yesterday. We live by a huge sledding hill and I had promised Bridget that the first chance we got we would go. Brent would have to be home to take care of Penelope and since he works A LOT this was the first opportunity we’ve had. I could just imagine working up an appetite and coming home and thawing out with a nice mug of that soup.

Unfortunately, Brent had a project that he was working on and he couldn’t watch Penelope. Bridget and I were both bummed out and I couldn’t help but feel the guilt seep in. Before Penelope was born Bridget was my little partner in crime. These days we just don’t have the same freedom that we used to.

I worried about how Bridget would react when I told her we wouldn’t be able to go sledding. But I was pleasantly surprised by her maturity when I broke the news. Instead, Penelope came with us while we went to the library and then to the store to buy the fixings for the best grilled cheese sandwich ever to go with our soup later that night!

I channelled Giada on this one. I just couldn’t wait to pluck those fat leaves off of my pretty little basil plant!

I’m not normally this enthusiastic about cooking. Don’t get me wrong, I get excited about food but usually when it’s all said and done I’d just rather watch somebody else do the cooking on the tv while I reheat something that I have on hand in the freezer.

But that tomato soup smelled so good and I just knew that my chicken fontina basil grilled cheese was going to be a hit.

Yes, this is a weight loss blog and no grilled cheese isn’t usually considered “diet food” but it was SO fresh and SO good. 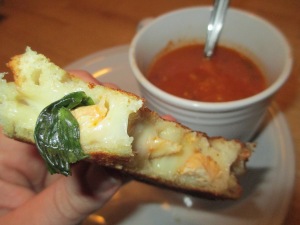 I only ate half of a sandwich. We’ll find out how effective eating grilled cheese is for weight loss when I weigh-in tomorrow… 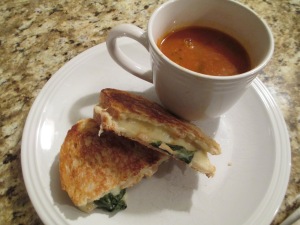 Bridget was at her swim team practice during dinner time and I wasn’t so sure how she would like the tomato soup since it wasn’t processed to taste like Spaghettios.

She loved it! She shoveled in the soup and then dipped her sandwich in it and took a big bite. There is something to be said about making a simple delicious meal for your family. I could feel my heart swell with pride when I saw the appreciation on their faces. 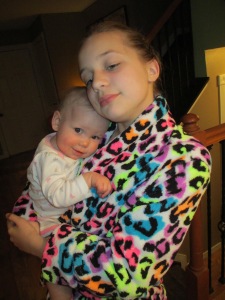 I’m pretty sure Bridget would take snuggles from her little sister over sledding any day.

Preheat oven to 400 degrees and slice tomatoes in half and place them on a foil lined baking sheet. Sprinkle with salt, pepper and drizzle with olive oil. Take 3 garlic cloves still in their skin and wrap in foil. Roast for 45 minutes to an hour.

Place roasted tomatoes and garlic removed from the skin in a blender or food processor and pulse until smooth.

In a sauce pan saute onion with a little olive oil for 2-3 minutes or until soft. Then saute 1 minced garlic clove until fragrant. Add red pepper flakes, roasted tomato mixture, chicken broth and fresh herbs to the sauce pan. Simmer uncovered for 25-30 minutes or until broth reduces to desired texture.

Fontina Cheese (I bought a wedge)

Heat a skillet at medium heat. Thinly slice the fontina and place it on a bread slice. Top with desired amount of chicken, torn basil leaves and top with more thinly sliced fontina and top with other slice of bread. Melt a small amount of butter in the skillet and place the sandwich on top and toast until you’ve reached your desired level of toastiness.