Yesterday was kind of rough. Penelope has a cold and Brent was working so that means that mommy didn’t get to go to the gym.

After I put Penelope to bed I was exhausted even though I had barely left the house. I hadn’t been able to take a shower or clean my house. I just kind of felt like a failure for being able to accomplish nothing but keeping my infant alive.

I wanted to sit down on the couch and get lost in some sort of mindless tv while I ate a pint of ice cream. I couldn’t though, I had a few emails I needed to check for school but as a habit I got on Facebook. As soon as I logged on this picture was the first thing I saw…

My initial reaction was… “Great! Another muscled up hot chick who can feel free to fling her hair around in reckless abandon to show off her six-pack abs because she’s never had the pleasure of encountering pregnancy induced hemroids.”

Even though the picture kind of pissed me off I stared anyway. Then I saw the name of the Facebook page advertising this photo… Kellfire.

Holy Crap, that’s my friend Kelly! I didn’t recognize her because she’s usually got her hair awkwardly sticking out of headgear while she’s practicing jujitsu with the fighters at Factory X.

She and her husband own Performance MMA and Performance Labs where she offers personal training and nutrition counseling. Oh… and she has three boys. So, I was totally off on that whole reckless abandon thing. I have always idolized her simply because she chases after her goals without fear and somehow manages to run businesses and raise three kids at the same time.

I knew she was fit but… DAMN!

Kelly and I met about four years ago when we did Muay Thai together at Factory X. We partnered up a lot to hold pads and became quick friends. That is until she asked to be my Facebook friend and I discovered that this was her profile picture… 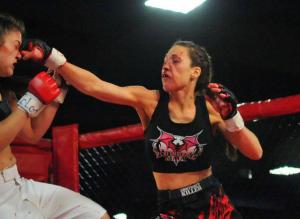 At that moment I wasn’t so sure I wanted to hold pads for her anymore. Just to give you an idea, this is what my profile picture looked like at the time… 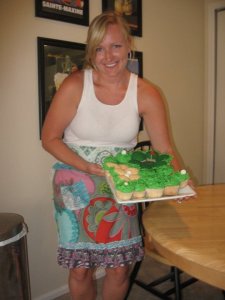 “You guys want some cupcakes?”

Over time I got to know Kelly even better and discovered that she was pretty awesome. She’s written a book about working out during pregnancy and she did her best to help me while I was pregnant. She would send my husband sneaky recipes to try to get me to keep eating protein since I was too sick  to eat anything of nutritional value. She also taught a cardio kickboxing class that I went to until my uterus got too big.

After I had Penelope I was a mess. I was trying to breastfeed but I was having so many complications from the hormonal imbalances from just giving birth and PCOS. I wanted to lose weight but was scared of what that might do to my milk supply. Kelly breastfed all three of her boys so I turned to her for constant advice.

During this time she created a meal plan for me. Once a week she emailed me a list of recipes and types of foods. She told me what to eat and when to eat it. When she works with a client she gathers all of your information and measurements,  and she develops plans meant just for you. She keeps constant council with you and makes adjustments accordingly.

She provided me the meal plan and the tools I needed to be successful and I got down to 203 shortly after. (Two pounds lower than I am today after two months of weight loss blogging.)

But I wasn’t ready for it. I was suffering from a significant dose of postpartum depression and I couldn’t seem to wrap my head around anything. I felt ashamed and overwhelmed.

I stopped doing what Kelly was telling me to do and I felt like I was the worst friend ever. She had put in so much work and invested so much interest to my success. All that she wanted was for me to believe in myself… but I just couldn’t do it.

Obviously, things have changed. If you look through the first posts of this blog you can see me still struggling. The hardest part about weight loss is the mental aspect. If you aren’t mentally prepared it’s not going to work. A lot of the time people feel like they’ve failed when they struggle. It’s important to realise that this is part of the whole process. Struggling is part of the journey. If you accept your short comings and refuse to give up despite them then you are destined for success.

What I’ve discovered is that when you screw up it isn’t the picking yourself up part that is hard. It’s laying on the ground acknowledging that you just fell that sucks the most. You can awkwardly lay there and hope that nobody noticed your trip up or you can simply acknowledge it, have a laugh and get up knowing that it won’t be the last time that you fall.

I feel like I am finally mentally ready for the changes that are taking place. Does that mean I won’t screw up? No. I’m gonna screw up but I’ll be okay with it and carry on.

You can tell when I have used the methods Kelly has taught me because that is when I have good weigh-ins.

Every time I get lazy and try to find an easier way and stray, my weight stays stagnant.

I mean, the woman knows what she is talking about…

She works with the professional fighters at Factory X to help them cut weight for their fights without losing their muscle mass. But her favorite clients are the moms who are looking to find themselves again.

She loves helping women find their strength, not only on the outside but on the inside too. She gets a thrill out of helping someone realise what they are capable of.

After seeing Kelly’s Kellfire facebook page and looking at her hottie pictures I had a renewed sense of motivation.

I went into the bathroom and ripped off my shirt before getting in the shower. I looked passed the smudged mascara and dirty hair and I flexed my muscles… and I saw her. That girl who is waiting to come out.

As the steam covered my reflection in the mirror I knew that somewhere underneath the stretch marks and fluffy skin that I’ve got a six-pack just like Kelly’s. She believes it is possible to uncover so why shouldn’t I?

I asked Kelly if she could provide her services at a distance just in case any of you were interested and she said that she could definitely do that.

So there you have it folks. If you are looking for someone to light a fire under your ass she’s your gal… Kellfire.

You can find out more information about her at theperformancelabs.com. You can also check out my very first failed attempt at a weight loss blog on her site 😉

Call me crazy because here I am trying again… so goes the theme of my life.

See you tomorrow on weigh-in day!