Today was a great day!

I had promised Bridget and her friend that I would take them to Larimer Square in Downton Denver for breakfast and then to the Tattered Cover Bookstore to pick out a book for their “book club”. Their book club isn’t like mine because they don’t drink wine… and they actually read books.

I was planning on taking them to The Market, one of my favorite undergrad hang out spots.

I would hang out with my friends Cate and Yulia here at least once a week. We met in a writing workshop class and we would spend in-between class time here talking about inappropriate things knowing that anyone lucky enough to eavesdrop would be sure to get an ear full.

I missed it, so I took the kids for the experience… minus the inappropriate talk.

The Market has some seriously tasty food but in order to escape temptation I made breakfast at home before we left. Bridget ordered the bread pudding because it reminds her of Harry Potter and her friend got the banana bread because it’s tasty.

I on the other hand, just had a cuppa. It tastes so much better when your mug sits on a saucer, don’t you think? 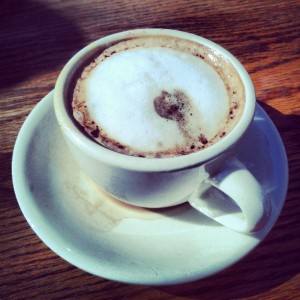 After breakfast we headed for the bookstore. On the walk there an old man wearing a golf hat and unnaturally white shoes sped up next to me in his hoveround. I smiled at him and he tipped his hat and asked me if I wanted to race. I politely told him that I wouldn’t dream of it because clearly he would beat me.

That’s when he winked at me and said… “I wouldn’t beat you but I would sure spank you.”

I wasn’t quite sure what to say to that…

Luckily he sped off before I had time to respond, leaving me with my mouth gaping open. I looked back to see if the kids heard him but they were too busy arguing over which kinds of books are the best… mystery or fantasy?

Bridget and I could live in this store. We spent the next hour searching for the perfect book for this month’s book club meeting. I proceeded to take pictures of books that caught my attention. 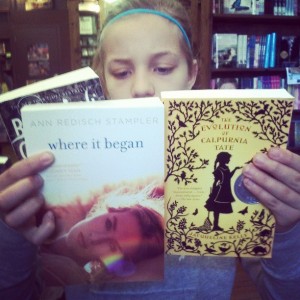 Okay, okay so maybe she is holding my books up for me because I like children and young adult books… a lot. We swap books quite often, actually.

When we got home I dug around in my garden, then went for a run and decided to test out those kale chips I’ve been hearing so much about. I looked up a recipe by Melissa d’Arabian.

They turned out perfect! You could audibly hear them crunch and they seemed to just disintegrate into my mouth. Bridget said she didn’t like them which I think is a lie because you can’t not like them. But I didn’t push the matter because I secretly wanted them all to myself. 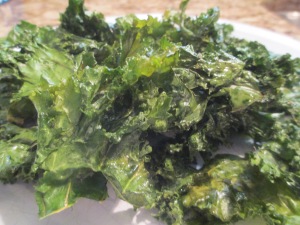 The recipe is as follows…

Preheat the oven to 275 degrees F.

Remove the ribs from the kale and cut into 1 1/2-inch pieces. Lay on a baking sheet and toss with the olive oil and salt. Bake until crisp, turning the leaves halfway through, about 20 minutes. Serve as finger food.

Brent will be at work tomorrow on Easter so it will just be the girls and me. I still need to fill a bunch of eggs with candy before I go to bed tonight.

If I were smart I would have made sure that the Easter Bunny was given gross candy to work with so that he wouldn’t be tempted to eat all of that sugary goodness.

Although, I could say that I was just trying to go along with the theme of Jesus’s death.

Bridget is too smart for that and would tell me that the yummy beans were the resurrection beans and if they were missing then I was being inaccurate.

We’ll see how many I manage NOT to eat.

Say a little prayer for me, will ya?

3 thoughts on “The Black Jelly Bean of Death”