I have simply been in the best mood lately. After looking back at my past few posts I kind of want to punch myself in the mouth. You can only handle so much pep, you know?

It still didn’t really do anything to dampen my mood. It’s strange really.

I think this might be because I’ve been taking a saffron extract supplement lately. I decided to do this after I did some research on it and found that it can help with depression and anxiety.

It’s also supposed to cut down on your cravings so you tend to eat less. This makes sense because when I’m depressed I self medicate with ice cream and junior mints… and pretty much anything else that I can fit into my mouth.

But that whole appetite suppressant thing didn’t really work last night when I broke into the left over Girl Scout cookies sitting in my garage. (Looking back I think I forgot to take it.) I don’t know what came over me. Penelope was whining, Bridget was having a preteen meltdown and I needed cookies. I didn’t over do it, which is good. Instead of eating an entire box I ate three cookies.

This is also REALLY good considering I’ve been alone with the girls 6 out of the past 8 days. The fact that I survived that alone is a testament to how good of a mood I’ve been in. I didn’t even want to bang my head against the kitchen counters or drink copious amounts of wine.

This morning after I dropped Bridget off at school I headed to the gym to do a little cardio before Brent got home. I kind of lost track of the time because I was too busy jamming out to pay attention. Before I knew it I had been on the elliptical machine for an hour and had supposedly burned 700 calories.

My crossfit friends would totally make fun of me for it… “Christy just checked in at Globo Gym. I totally think she does the elliptical machine… eew.”

( I know I’ve already posted this video but I just love it so much!)

After I got home Brent was waiting to snuggle with Penelope. I gave him a kiss and pretty much said, “Umm, so you’ve got this right?” and ran out the door minus the baby for some much needed alone time.

I’m such a dork. When I find a moment of freedom I head for the book store to drink hot blueberry green tea and read fitness magazines… and a little bit of gossip. 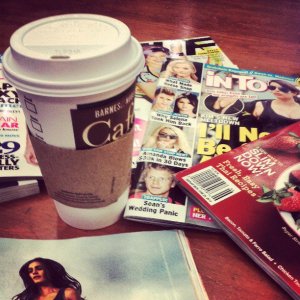 Apparently, the world is very concerned about how fat Kim Kardashion’s armpit has gotten… poor girl.

Another reason to only aspire to be rich and anonymous.

This past summer shortly after having Penelope I was sitting in the exact same spot drinking a much more fattening drink. I was suffering from post-partum depression (even though I didn’t know it at the time). That day I had pretty much run out of the house crying because I felt awful about myself.  I just needed a moment to be by myself so that I could drown my sorrows in a sugar coffee. That’s when I came across this picture of Jessica Simpson…

Initially, I felt really bad for her. The media can be so cruel. At the same time I loved her because she looked just like me. I texted this photo to Brent with the caption… “Okay, I don’t feel so bad now.”

You see Jessica and I have a connection because we could practically be twins… Bridget said so.

It was 2003 and I had just lost all of my baby weight. I was waiting in line at the grocery store and Jessica Simpson was on the cover of one of the magazines. Bridget reached out, pointed at her picture and said, “Mommy!” I just grinned and said, “Yep, sure is.”

It just goes to show how beautiful you are in your children’s eyes. If only we looked at ourselves through the same lens.

The moral of the story? Be nice to yourself… even if you did break into that box of Girl Scout cookies. It’s just payment for the hours spent helping your kid sell them 😉

Do you take any nutritional supplements? What do you think of them?

4 thoughts on “Bouncing Back After Baby”