Hey, remember that one time when I confessed to having a screwsupalot defect?

Well, I’ve still got it.

This morning started off great by having a bickering match with my preteen on whether or not she is capable of making her own breakfast comprised of yogurt. This blew up into a whole “my mom sucks” battle that Brent had to step into the middle of and dissolve before we both exploded, splattering estrogen all over the kitchen walls.

(Since I was raised by a bachelor I missed the memo that all preteen girls are required to hate their mother. I don’t really care for this rule.)

After that blew over Brent suggested I take Bridget to Starbucks so that we could spend some quality alone time together before she went to school.

That was a great idea…

Until I decided to smash my left headlight and rip my front bumper off by crashing into my neighbor’s car as I exited my driveway.

You see the neighbor across the street has a “no parking in my own driveway” clause that means his sons must park in the street blocking half of my driveway. It’s much more convenient that way you see?

As I marched my sassy self across the street to bang on his door it started to pour rain. Needless to say, he didn’t answer it. He must have peered out of the peep-hole to see the steam rising off of my head as the rain pelted it.

This was probably for the best as far as both parties were concerned. He may have lost an eye and I would have lost a foot because it would have been lodged…

…yeah, you know where I’m going with that one.

Dejected I marched back into my house, threw myself onto my bed with as much dramatic flair I could muster and announced a muffled, “I QUIT!” through my tear soaked pillow.

My husband kindly pointed out that I was acting just like my preteen daughter. This pissed me off even more… because he was right.

Finally I got it together long enough to find a body shop to take my broken car to. As we drove through the seediest part of Denver to drop my car off it was still pouring rain. In the distance I could hear the slightest rumble of thunder in the sky.

By the time I got home the clouds had parted all around us. Every direction I looked the sky was still dark grey but where I stood was a funnel of sunshine.

Penelope and I took that time to play outside letting the cool grass tickle our toes as we admired our flowers.

Those purple flowers are great and all but Penelope prefers that yellow flower that turns into those fuzzy seedy balls. She likes to rip them out of the ground and crush the petals in her tiny fist. Then she smears the crumpled yellow remains across her forehead in a ritualistic way, as if she’s cleansing herself.

That last bit is the noise she makes when she gives you a kiss.

She kissed me on the mouth leaving a trail of clear snot on my upper lip. Then she simultaneously smacked both of my cheeks two times and rested her forehead against mine.

In an instant the spell had been broken.

In that moment I realised that today didn’t have to be so bad after all. The direction it took was entirely up to me. 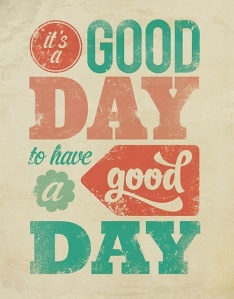 The rain came back but it was no longer the angry rain that it was in the morning. Instead, it presented itself as that cosey spring time rain that promises to make everything more beautiful the next day when the sun gets a chance to touch it.

Tonight will be spent cuddling with that preteen who is supposed to hate me, only she’ll forget that part as we drink hot tea and begin to watch season three of Downton Abbey.

Then when it is time for her to go to bed she’ll ask me to lay under the covers with her for a while so that she can tell me all about all of the latest fifth grade gossip.

One thought on “Dandelion Magic”