When I first started this blog I told myself that I would write it as if I were talking to my best friend. No holding back, no social graces just me being me.

Well recently I’ve been getting emails from several companies asking me to do product reviews. I’ve even had a few companies offer to pay me for my subscription list… which I rejected right away. If I’m following your blog and you take the liberty to sell my email address to some schmuck with greasy hair and gold rings on his fingers (that’s how I envision him) then you and I would have a problem because I would be pissed. I’m the only one allowed to share my private information.

As soon as these offers started piling in I couldn’t help but feel super excited because that is the first step to taking this blogging business to the next level. However, I’ve been a little apprehensive about this because I’m all about being brutally honest. My fear was that I would receive a gift from a business and be forced to say mean things about it. I don’t want to come across as ungrateful. At the same time my number one concern is that my blog stays authentic…. just me being me.

I’ve weeded through the companies by sending them the disclaimer that if they want me to review their products they better feel 100% confident about what they are trying to sell because I wasn’t going to simply give a good review  because I got some free stuff.

That being said, Scout got a package in the mail today from Purina Dog Chow. 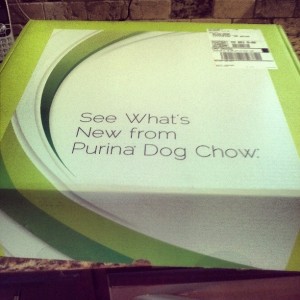 Purina asked me to be a part of their Healthy Hundred which is a family based program that focuses on getting outside with your kids and dogs and playing to your hearts content. I accepted immediately because playing outside is what I’m all about!

I opened the box and it was like doggie Christmas in this place! Scout got a dog bowl, a leash, a puppy pedometer, his own travelling water bottle, and a bandana. (He’s been fixed but he still has to look nice for the ladies.) We also received a flip camera and a custom journal with family fitness tips. This is perfect because Bridget decided she wanted to start running with me in the mornings. Scout is the official running partner of choice at our house. When Bridget get’s older and wants to run on her own I’ll insist on him being her chaperone. Nobody is going to mess with a chick with a Dingo by her side.

We also received a 32 pound bag of Purina Light & Healthy dog food. It arrived just in time, Scout was running a little low on food. As I poured it into Scout’s food bin I became a little concerned. It was comprised of different colored nuggets with different textures. In history Scout has not been a fan of the variety dog foods like that. I think it confuses him. He would only pick out the hard brown pieces because that’s what he’s used to. 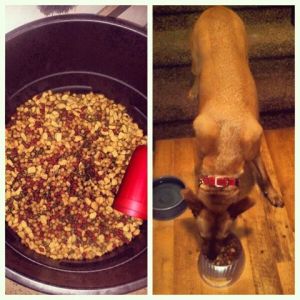 I poured him a big bowl full anyway and at first he would take a mouthful and spit it out on the ground and eat each type separately. The green bits first, then the red, then the white… In my head I was thinking, Are you kidding me? Come on Nancy just eat the damn food. Then he stopped being so delicate and just chowed down on it. I guess he just had to make sure each piece lived up to standard. We haven’t had a problem with it since. He loves it! I’m so relieved because they sent us some pretty cool stuff.

We haven’t used the pedometer yet but I’m looking forward to it because I have no idea how far my favorite running route around my house is. I don’t know if you noticed but I posted a picture of my to-do list yesterday and the only thing that wasn’t marked off was “workout”. I haven’t quite gotten back into my groove since vacation just yet. In fact I’ve been putting off weighing myself since we got back. I usually do it first thing in the morning on weigh-in day but this morning I found myself watering the plants and playing with Penelope. Anything to keep me off the scale. Finally after Penelope went down for her morning nap I did it…

My weigh-in before vacation was 192 and I told myself that I would relax and go into maintenance mode. I didn’t think it would actually work though! I think this is the first time in my life that I’ve gone on vacation and didn’t gain a pound. Yay me! This has got me so motivated to keep going!

What is your vacation strategy? Do you stick to your diet or do you say “to hell with it” and go all out?