Earlier this summer I had it dialed in. I was working out, eating well and just generally being awesome at life. I was feeling healthy, happy and totally in control. Then we had a trip or two, a few house guests and a wildland deployment and suddenly I had lost that awesome groove I had found myself in.

I feel like that chick who is clapping her hands at the wrong time during a song.

So this weekend was dedicated to finding that rhythm that I had found earlier this summer. It didn’t come naturally so I had to fake being more organized and prepared than I actually am. My goal was to start creating new better habits since it’s become so blatantly clear that I have fallen into bad ones.

Habit #1: Workout first thing in the morning. It doesn’t have to be my whole workout but I’ve got to get something under my belt before the distractions start rolling in. We have a choice here, either Mommy takes time to workout or she starts choking down crazy pills with her morning vodka. And apparently there is a good chance she’ll start talking in the third person too… What the crap was that?

Habit #2: Quit wasting time. I feel like I’m always stuck in transition. I’m more of a fly by the seat of your pants kinda gal but this way of life doesn’t really work out well with a toddler. I have found it is necessary for me to schedule in a shower or it just doesn’t happen. That’s gross. I’ve decided that I need to create a tentative schedule so that I don’t spin around in circles trying to figure out what I need to get done.

Habit #3: Take a moment to take care of you. Not you… me. I’m the kind of girl who is okay with not looking good 100% of the time. I just need to know that I could look good if I wanted to. That being said, I feel so much better when my hair is fixed and I’m not sporting a pair of yoga pants and a t-shirt all day long. Primping feels like such a luxury but the truth is if I had a job I would do it. So there is no shame in spending a little face time in the mirror.

Like I said, I have gotten so out of tune everything I tried this weekend to get into a better groove felt really forced. I spent a ton of time in the kitchen trying to get back into eating cleaner, homemade food. I even made kabobs because they always look pretty when you see them in magazines and on blogs. Well guess what… 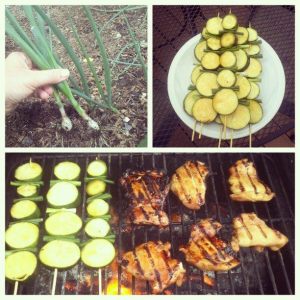 Kabobs aren’t cute. It takes forever to skewer the damn things and then they don’t cook evenly! Proof that picture perfect isn’t always so perfect.

I was a little disappointed that those didn’t work out like I had imagined so I made zucchini carrot coconut craisin oatmeal cookies shortly after. I was telling myself that I was making these to use up that blasted zucchini that is taking over my garden but the truth is I wanted a cookie because I was bummed out about my kabobs. 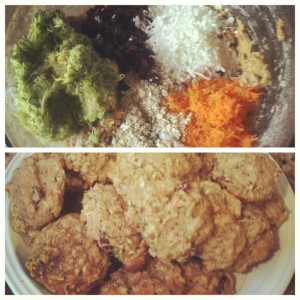 I hid behind that fake mask of health as I blended sugar and softened butter together in the name of veggie filled cookies.

The truth is, we don’t need cookies in the house. After I started mixing I was afraid I wouldn’t be able to stay out of them but luckily they weren’t as good as I thought they would be. (Probably because of all of the healthy stuff.) Personally, I thought the cookie dough on it’s own tasted so much better.  Luckily, everyone else thought they were awesome so I let them eat half of the batch before I froze the rest for future after school snacks… See? I’m thinking ahead.

So far of all the things that I had spent the time prepping and cooking didn’t turn out that great. Then I made this kale chopped salad with maple-almond vinaigrette . It was so yummy I couldn’t stop thinking about it. In fact, I’ll probably be eating this for lunch tomorrow.

It’s got just enough naughty bits (bacon and fried shallots) to make it crave worthy but healthy enough to make you feel good about eating it.

I also made this cherry almond oatmeal one morning and it was super yummy too.

My entire weekend wasn’t spent in the kitchen. I spent a lot of time playing outside with the girls and frequenting the farmer’s market.

I also spent some time in the yard admiring my handiwork…

Today was delightfully rainy. It almost felt like fall so Bridget and I spent the afternoon watching Modern Family while I did the laundry. It has been determined that I am Cam…

I just love that guy, but honestly I would rather be one of the hottie moms on the show… just sayin’.

Speaking of which, I better go because I have to do a workout first thing in the morning!

2 thoughts on “Kabobs Aren’t Cute and Other News”