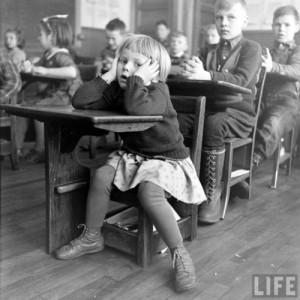 Today was a day I’ve been waiting for quite some time. I took the PLACE test for my teacher certification. While I was sitting in that stuffy room filling in bubbles with my number two pencil I was catapulted back to my younger years, back before I actually knew I was smart.

I spent the majority of my childhood school years day dreaming instead of paying attention. When I was little I actually gave numbers personalities to kill the time. They were all characters in a drama that only I knew the plot to. Looking back there were actually patterns connected to why they were who they were and why we liked them or didn’t like them… and by “we” I mean the audience and by the audience I mean me.

To this day you could call out a number between one and one hundred and I could tell you whether they were male or female, a good guy or a bad guy and who they had a crush on. I’m not kidding… although, I kind of wish I were.

Later on these numbers continued their sagas through multiplication and division. It was like reading through to the seventh book of Harry Potter only not quite so riveting.

When I was younger I was an awful student. Having to sit still as a monotone voice read a script aloud from a printout was the equivalent of listening to static on a television. It did nothing to peak my interest. There was also something about multiple choice questions that always bugged me. The answers I had to choose from were never interesting enough. They did nothing to convey my thoughts on the subject matter. I would have worded it so much better.

This eventually led to severe boredom and that boredom led to my uncanny ability to walk out the front door of my high school when I was actually supposed to be walking into a classroom.

The trick to skipping school was confidence. With confidence you never get caught… That is, until they look at your attendance record in the office and call your dad to notify him.

I had plenty of time to daydream about the love triangle between 8, 9 and 16 while I sat in my corner during in-school suspension.

Early on my dad had made it very clear that when I went to college it would be in my hometown at the local college. There was no choice about it. I knew that pretty much anyone could get into that school. There was nothing really to work towards. It was just going to be a continuation of high school. Kind of like the movie Ground Hog Day… I hate that movie.

I spent my first semester of college attending classes, staring at the back of the same heads that I had been staring at the previous thirteen years of my life as a TA read aloud from a scripted printout… in a monotone voice. It was torture. So, I dropped out.

I was a single mom who had moved back to my hometown to raise my little one. I went back to school with conviction. It didn’t matter if school struck my fancy because I had another little person to take care of. I needed an education so that I could get a good paying job. Once I got beyond the freshman courses I discovered that I actually liked learning. Not only did I like it, I was good at it. After two years of college, cramming in as much course work as possible, I was only a few semesters shy of graduating with a degree in education.

During this time I was in a long distance relationship with the love of my life. Bridget was getting older and the distance was getting tiresome. Brent and I wanted to get married and raise Bridget together. We wanted to be a family. After a lot of soul-searching we decided to take the plunge. I moved from Texas to Colorado.

The plan was for me to work until I got residency and then transfer my credits and pick up where I left off.

It wasn’t that easy…

Being newlyweds with a two and a half year old posed its challenges. The amount of education that I had obtained was enough for me to land a great job as a preschool teacher at a private school. It was a dream job. I got paid well, I was encouraged to be creative and Bridget was able to attend for a minimal fee.

It was a great situation but as the years slipped away the nagging feeling of not finishing what I had started got greater and greater. The thought of not being able to get my degree was heart breaking. There were moments when I didn’t think it would ever happen.

When Bridget started kindergarten I decided it was time to go back to school. There would be no stopping me. Luckily, Brent had my back and we made the necessary sacrifices to make it happen.

Unfortunately, in the process of transferring my previous school work I lost 32 credit hours. (That’s the equivalent of a year of school.) The education programs between Colorado and Texas were completely different. After talking to an advisor it was determined that it would take just as much time for me to complete a basic bachelor’s degree and get my master’s in education as it would for me to simply get a bachelor’s degree in education.  I’m still confused on her math but I didn’t question it because this gave me the opportunity to get a degree in anything I wanted other than education.

This was the perfect opportunity to plunge into a degree in creative writing. It’s kind of like getting a degree in philosophy or classical guitar. If you actually want a job you’re going to need a backup plan. The beauty of it was that I already had mine in place. I was just taking the scenic route to becoming a teacher.

It was amazing! I went to CU in the heart of downtown Denver. I was part suburban housewife part urban intellect. I was exposed to culture and I was encouraged to think independently. In fact, all of those tendencies that got me in trouble when I was younger actually helped me thrive. When my weird insights were transferred to paper they yielded high marks and praise from highly esteemed professors. I could chase any avenue my brain wanted me to, in fact it was encouraged.

One day as I sat in my professor’s office to discuss a paper she urged me to continue on and try for a Ph.D. I was taken aback. There was no way I was smart enough to go that far. But she insisted, she was absolutely certain that I had what it took. All of that stubborn independent thought that I had struggled to reign in all of those years was actually the key to my education. I carried this key with me during those formative years and I never knew it because the system was too busy trying to fit me into the wrong lock. I think having this perspective will help me when it’s my turn as an educator. I want to help my unconventional students understand that just because they don’t thrive right away it doesn’t mean that they aren’t brilliant. It just means that they have to find they’re own special way of shining bright…

So here I was, ten years since I had started this journey.  I found myself sitting in a high school classroom crammed in a tiny plastic desk reading an excerpt from a piece of literature I know quite well. In fact, I had written several papers analyzing this particular author’s works. I tapped my number two pencil against my mouth looking over the vague options that had been presented to me in the form of A, B, C or D. I couldn’t help but think, “Oh brother, here we go again…”

There’s no telling whether I passed that test today, but it doesn’t matter because I’ll continue to take it until I do.

Walking out the front doors of that high school today I couldn’t help but feel a sense of pride. I had made a promise to myself several years ago that I would get to this point and I’ve kept that promise. As I walked across the asphalt toward my car I could feel a grin start to spread across my face. For some inexplicable reason I couldn’t help but feel like I was on top of the world. Who knows, maybe I will go after that Ph.D. after all.

7 thoughts on “On Top of The World”