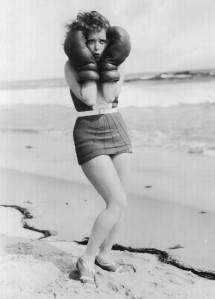 My hands are shaking as I type this because the muscles in my arms and back are super sore.

I can feel every twitchy movement my muscles make and it gives me the illusion that I’m super buff… like a super hero buff. Then I look in the mirror and nothing seems to have changed since I last looked, shattering the image I had of myself in my head. When this happens I choose to not look in the mirror and continue to strut my stuff in my preferred delusional state.

It’s all about perspective… right?

If you’ve been watching the news you are aware that the state of Colorado is having a dress rehearsal for the apocalypse. I feel bad for everyone who has had to deal with the flooding and I feel grateful that we don’t live where all the chaos is going down. However, it still rained all week long and the majority of the weekend. So I was really happy when I woke up on Saturday and saw that the sun was out and wanted to play. Without hesitation I loaded Penelope up in the jogging stroller so that I could take her and Scout out for a run. 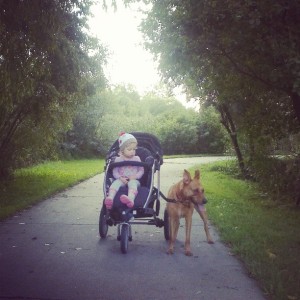 Poor Scout had a crazed look in his eyes all week from not being able to go play outside. I usually don’t take him with the stroller because he’s a complete spaz but I couldn’t leave him at home on the only sunny day we had all week. I’m fairly certain he was under the impression that it was he who was walking his pet human and not the other way around.We ran for about three miles and I was surprised at how easy it was.

Sunday came around and I was invited to go to a private muay thai class with my friends from Factory X. I was in heaven! I was doing Muay Thai before I got pregnant with Penelope. When Brent and I were talking about having a baby one of my main concerns was that I wouldn’t be able to do Muay Thai anymore. I love it that much!

My friend Chase, taught the class for his friends and family. He was a little disgruntled about having to wake up on a Sunday 🙂 But I was super glad that he did!

Chase’s mom is the one in the green flexing her muscles. Isn’t she unbelievably hot?!

I felt so awesome throughout the whole workout. I was a lot slower than I used to be but I still felt good. Then, I got a glimpse of the pictures Bridget took during the class and I didn’t feel so great. Once again, the visual I had of myself in my head was shattered. One day I will look good when I workout… one day.

After the workout I felt a little sad because I miss Muay Thai so much! Muay Thai was the first sport I had come into contact with in a long time that flared up that competitive drive I had when I was younger and played soccer.

There are two things that I’ve always wanted to do before I got too old to do it. Fight in a Muay Thai bout and be on a roller derby team. Since Penelope is so young those things will have to wait… But one day it will happen.

While I wait I’ll have plenty of time to pick out my roller derby name and my walk out song. As far as the name is concerned I’ve got Helen Killer and Betty Rage… but both of those don’t seem to fit.

However, I do have my pretend walk out song picked out for your listening pleasure (ignore the talking at the beginning)… I Cut Like A Buffalo

What would your roller derby name be and which song would you walk out to if you were a fighter?