Yesterday was the last day of Summer/ First day of Fall and I spent it eating pancakes that weren’t actual pancakes and artificially inseminating pumpkins… I have mixed emotions about it all, really.

When I stepped foot outside I could feel a change in the air. It was cool and crisp and it made me glad that the coffee ban wasn’t in effect during the weekends. From where I stood I could see the orange blossoms of my pumpkin patch and it gave me the giddy hope of actually being successful in my gardening endeavors.

If you’ve been reading this blog for long then you will be well aware of my unhealthy obsession with growing pumpkins this year. In fact, this was my first year at actually having a successful garden and I had no idea how emotionally invested I would become.  In mid-Summer I thought all of my dreams of having a garden were dashed when a freak hail storm tore up everything I had worked for. However, it didn’t take long for hope to blossom in the form of baby pumpkins who grew despite the devastation. (I was quite dramatic about the whole thing.)

Unfortunately, the little pumpkins kept shrivelling up and falling off. I pretty much gave up on the whole gardening business because it was really starting to tick me off.  During that time the rains came and stayed for over a week.  When the sun came out I stepped outside to see that all of that rain had revived everything. I was so happy to see a whole stock of vegetables grew despite of my lack of faith.

The pumpkin patch was also taking off and more little baby pumpkins popped up and I saw my chance at having a successful pumpkin patch after all! I did some research and discovered that my pumpkin troubles may be caused by lack of pollination. So, I took matters into my own hands by playing match maker.

I couldn’t help but feel like I was violating my plants when I pulled the flower petals back. However, desperate times call for drastic measures. I had to do it for this little Pumpkin Patch Kid! She’s been waiting all summer to see her pumpkins!

This whole gardening process has been a long one. During the long winter I started seeds in doors and became quite attached to them. I started to look at them as seeds of hope. They had a long way to grow but one day they would be something beautiful… and quite tasty.

There were so many times when I just wanted to give up on the whole damn thing. I would put in so much effort and then something would go wrong and I would get really ticked off about it. But it didn’t take me long to realize that it’s all about the process. Sometimes you get to enjoy the tasty fruits of your labor and sometimes you have to work a little harder before you get to reap the rewards. It’s a lot like this whole weight loss process. In fact, it’s a lot like life.

After  pollinating the pumpkins I began to feel hungry so I went inside to make some breakfast. The cool weather had me craving pancakes but that wouldn’t do me any favors with my weight loss efforts. That’s when I remembered reading about “pancakes” that were simply made from mashed banana and eggs. I decided to give it a try was so glad that I did!

I just heated up a pan over medium-high heat and waited to find out how it turned out.

In fact, I’ve made it four times since then because Penelope is feeling under the weather and it’s the only thing that she will eat. You don’t even have to put syrup on it because the banana is naturally so sweet. Bridget was skeptical and so was Brent but they also thought they were super yummy! I seriously doubt I’ll feel the need to make regular pancakes again. There were THAT good!

We spent the rest of the day playing outside… 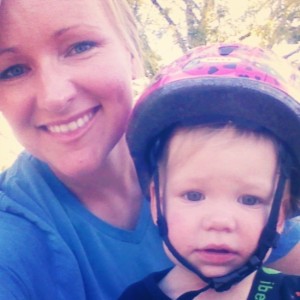 and had a “So long Summer” dinner as we enjoyed the bounty that came out of our back yard.

There’s something about the change of seasons that makes you feel revived. I’m looking forward to the rest of the week and the prospect of Penelope’s recovery. There’s too much outdoor exploring to do to be that sick! Plus a good night’s sleep would do this house hold wonders!

What did you do on the first day of Fall?

One thought on “Violating Pumpkins and Making Yummy “Pancakes””