Well, well, well… didn’t Monday just sneak up on me!

We spent Saturday in the mountains soaking up all of the beauty Colorado has to offer during this time of year. We drove to Breckenridge which is about an hour from where we live. Brent makes this trek a lot more often than he would like to since he works in Breckenridge but for me this was a special treat. Deep down I’m still a Texan, because I can’t help but get super excited when we go to the mountains. It always makes me feel like I’m on vacation even though I live here. 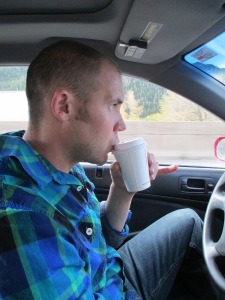 Brent, however, takes it upon himself to act like a true local. Meaning he sips on his tiny coffee while yelling at tourists who slow down to gawk at the scenery. This is exactly how I drive when I’m in the mountains. So, it was a given that he would drive so that I could take pictures. I just can’t get over the fact that I’m fortunate enough to live here! I never would have imagined…

We actually went up there to attend an awards ceremony with the Fire Department. As soon as that was over I made Brent let me run around main street to take more pictures of the changing colors. 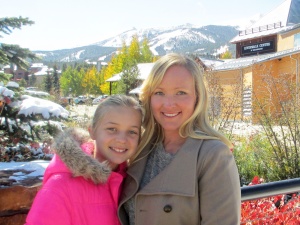 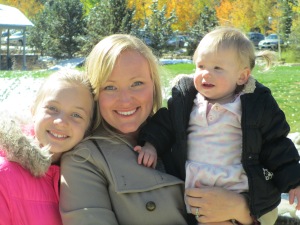 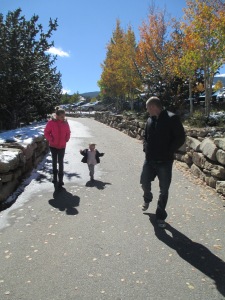 When Penelope started to get unbearably cranky we came home and snuggled up to watch The Great Pumpkin Charlie Brown. It was Penelope’s first time and it proved to be more for our benefit than for hers.

That night nobody got any sleep because Penelope cried all night. Sunday morning she greeted us with a snotty nose. I was exhausted but was still itching for some exercise so I went to yoga. It was the only class that offered to let me take a nap for ten minutes at the end of it. I figured it was the only way I would catch some z’s. Brent stayed home with the girls and made them one of his signature weekend breakfasts. I was glad I missed it because I was too tired to resist the smell of bacon and french toast.

As the weekend wore on I seemed to get more and more tired. I just couldn’t get going. Then today while I was out on a walk with my friend it hit me… I’m sick too. Normally illness just kind of slowly creeps in without out me really knowing when it happened. I can’t usually put a finger on the exact moment I got sick but today it hit me at 10:00 on the dot. I was suddenly lethargic and dizzy and my head started to pound in that you have the flu kind of way. Brent ordered me to go to bed and rest up since he’s leaving for work tomorrow but Penelope woke up from her nap an hour too early so I’ll probably drink some hot tea while I watch her play on the stairs wearing her bicycle helmet.

How did your weekend go? Did you get to enjoy the Fall weather where you are?

One thought on “The Weekend”