It’s been crazy around here! My toddler has taken to smuggling pretzels in her diaper, won’t stop licking the trash can and has a snot mustache… which is probably caused by one or more of her less than sanitary habits.

This means I haven’t been able to take her to the gym lately.  All runs are also out of the question because if she spends longer than 10 minutes in the stroller she screams out to everyone we pass as if to say, “Help me! My Mom is abusing me with exercise!” 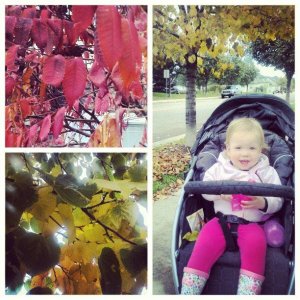 You could never tell it by looking at this picture could you? Don’t let her trick you, it’s all apart of her plan.

Even though she’s sick she’s still hyper active… and angry. An angry hyper active toddler is the perfect recipe for my demise. When she bangs her head on the floor to show me she’s angry I’m tempted to join her in hopes of being put out of my misery.

Brent’s been at work so I’ve been completely on my own and I haven’t felt all that great either so maybe it’s for the better that I don’t work out. I’ve been chowing down on this stuff like it’s candy in hopes of taming the beast.

This stuff seriously works, plus I like the way they taste. It reminds me of those Luden’s throat drops that kids used to take to school when they had a sore throats. I used to be so jealous of those kids because being able to take Luden’s to school was like being given special permission to eat candy all throughout the day.

My dad never bought them for me because I was an unfortunately healthy child. I only know how they taste because I was lucky enough to have sick friends who would share. (How did I not get sick?!)

Long story short, my solution to the past couple of days was to have a pity party… in my mouth.

I didn’t intend for it to be that way but that’s kind of how it worked out. I don’t know what it is but colds make me super hungry. Maybe I’m dehydrated and my body is giving me mixed signals but my stomach won’t stop growling at me. I started off fine yesterday, I hung in there as long as I could then by the afternoon I was eating pumpkin spiced almonds in a trance like state. Pick… crunch, crunch, crunch… Pick… crunch, crunch, crunch… I have no idea how much I ate. All I knew was that I. Just. Couldn’t. Stop.

Today Penelope woke up with crazy eyes to go along with her snot mustache. She looked like a pirate baby who had been binge drinking all night long. So I cut her some slack and didn’t even try to take her for a run. Instead, I took her to the park to get some fresh air before heading for the grocery store.

It was absolutely beautiful outside! The leaves are in the first stages of changing making them brilliant and bright. It was everything that you could hope for on a Fall day.  As I chased Penelope, who was chasing a squirrel, I looked up and saw three hot air balloons dangling in the air, my sign for good things to come. I just stopped right there and took a moment to acknowledge that in that very moment life was perfect…

Then Penelope fell face first in a puddle. She cried for the rest of the morning. I have also taken to eating more of those blasted pumpkin spice almonds .

*** I got an email from Christina S. asking me about the meal plan that I have been following. I tried to email you back my response but for some reason your email address was invalid. You can try to email me again so that I can get back to you or you can wait and I’ll address your question in a blog post.***

One thought on “Less Than Sanitary Habits”