Good morning world! It’s a cold and frigid one in these parts. 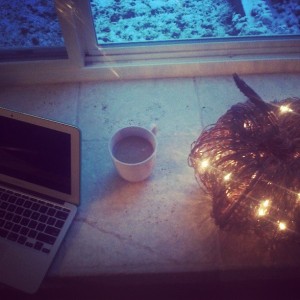 The past few days have been a little rough because the little one has had a bad reaction to the flu shot she got on Monday for her 18 month appointment. She must have not been far enough removed from the cold she had the previous week. By Tuesday night she was running a fever that escalated to 104 and was feeling bad off and on for the remainder of the week.

Whenever she was feeling well we went to the park to get some fresh air. Where I would only let her play with the geese in case she did have something contagious.

I call this picture, “Wolf in sheep’s clothing.”

Whenever I was able to get out with her I made our ordinary outings to the grocery store as special as possible.

I mean seriously… who takes time to take pictures outside of a grocery store?

For the first time in her life she’s been super clingy and we spent many hours watching Sesame Street and reading books. To be honest I kind of loved it. Only, I wasn’t a huge fan of worrying about her late into the night as her temperature climbed and she writhed in discomfort. Hopefully last night was the last of it because she woke up in the middle of the night drenched in sweat. We pulled her into bed with us (another thing she does not tolerate) where she still remains snuggled under our covers as I type this. I’m pretty sure this is the latest she’s slept in her entire life. I don’t even set an alarm clock anymore. I usually just let Penelope let me know when it’s time to get up.

I still managed to go to the gym, fit in a crossfit workout and squeeze in a run thanks to the help of my husband who has been off work for the past three days. I’m a little sore so I feel like I’ve done my job.

My diet wasn’t at 100%. It could have been worse but it could have been better. It usually fell to pieces in the evening when I needed to make dinner but Penelope wouldn’t let me put her down.

In the mornings I’ve been obsessed with two ingredient pancakes (2 eggs + 1 banana). 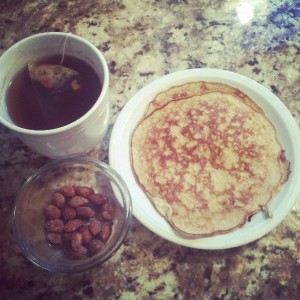 I’m also in love with this cinnamon tea I found that tastes like red hots.

For lunches I’ve mainly stuck with salads because they keep me full and I’ve been craving them like crazy.

And at dinner it has been a free for all since Penelope as been sick. I probably ate chili three times…

It would not hurt my feelings if I never had it again.

Thanks to the feedback I received about weigh-ins and food journaling I’ve made a few decisions. I’ve decided to continue to weigh-in weekly only I’m moving my weigh-in day to Monday so that I have to stay on point throughout the weekend. I’ve also had a little pep talk with myself about slacking off right after a weigh-in that went a little something like this…

“Knock that shit off!”

I’ve also decided to take pictures of my food on random days to illustrate how I eat when I’m on point. I won’t ramble on and on about what I’m eating unless I’ve found an amazing recipe that I want to try out. I’ve also decided that if I’m going to eat something less than stellar I have to post it on here for you all to see. It will be like a confessional… only there won’t be blushing priest.

I must be on my way now another round of Sesame Street awaits! Hope you have a wonderful weekend and I’ll see you Monday for the new weigh-in!

2 thoughts on “We Interrupt This Programming…”