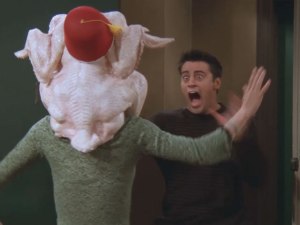 It’s the week of Thanksgiving and I can tell that I’ve made progress over the past year because I’m not freaking out about it.

“What is there to freak out about?” you might ask.

Freaking out sounds like a very dramatic reaction to Thanksgiving. These freak outs were never presented in an outward fashion for all to see. It was always something hidden deep down where all of the other insecurities fester. These little freak out’s were hidden in that place in my mind that originated sometime in those awkward prepubescent years when I was self-conscious about everything. A place where I hid everything about myself that I don’t want other people to know about me.

So, in true Nina fashion I’m going to tell you about it so that it can’t fester there anymore…

In the past I would always have anxiety about the pending holidays because I knew I was going to get all crazy with the festivities… and by festivities I mean food, lots and lots of food. This was usually the time of year where I was catapulted into a shame spiral that would cause me to easily gain an additional ten pounds in the weeks between Thanksgiving and Christmas.

It’s a freak show that usually ends with me acting like Buddy the Elf drizzling maple syrup on everything before I shoveled it into my mouth.

I would freak out because I knew what I was about to do and I knew I could stop it but I didn’t want to because to me food equals good feelings and the holidays are all about good feelings right? It wasn’t the actual holidays that did the damage it was the guilt eating that I did around the holidays that always screwed me over. This has been the trap I’ve found myself in year after year.

If you are anything like me than this starts the Friday before the week of Thanksgiving.  This is when you decide that it was okay to get a head start on eating crappy because the holiday was just a few days away. (I would even eat stuff I didn’t even want to eat because I was giving myself a free pass until the holiday was over so I thought I better live it up while I could.)

The problem with a holiday that takes place on a Thursday is that when you are on an all or nothing kick you probably aren’t likely to vow to get your shit together again until Monday… because Monday usually sounds like a good time for a fresh start. That gives you an extra three days to become even more unravelled.

Finally, Monday arrives and you have good intentions, only things don’t go as well as you had planned. So you say, “SCREW IT! I’ll start over tomorrow.” Then you’ll think… Well, if I’m starting tomorrow then I better live it up tonight while I can.

You’ll do this for the next three days and before you know it Friday has rolled around again and you’ve maybe only eaten well one day out of the whole week. Then you figure it doesn’t matter because you have a holiday party to go to that weekend so you might as well just wait until the next Monday to start over…

By this time you have officially been caught in that vicious cycle. Before you know it the holidays are over and after you’ve taken down all of the tinsel and lights you take a moment to look in the mirror to see what you’ve done. If you’re really brave you step on the scale.

That’s when you decide you seriously need to do something to get things in order… but you should probably wait to start on New Year’s Day because you have that New Year’s Eve party to go to. It’s the cycle that just, won’t. stop.

If you aren’t like me then this has never happened to you and you think I’m a complete weirdo… if that’s the case then let’s pretend like you didn’t just read that.

I didn’t realize just how weird it was until I just wrote it out.

I don’t know why I would think like that. It just doesn’t make any sense! This year something is different, I can’t really put my finger on it but I don’t think I’m going to end up like that again.

Sometimes I want to beat myself up for not losing more weight throughout this past year, for not going hardcore and shedding the pounds super fast. Then I realize that I’ve beaten that crazy all or nothing mindset that I struggled with that put me in the position to need to write a weight loss blog in the first place. The mindset that made me feel like I had to do things perfectly or not at all. I’ve grown a lot over the past year and with all of this self reflection I’ve learned to cut myself some slack. That’s when I realized that I’ve actually made a lifestyle change. I’m not waiting for this “diet” to be over so that I can go back to being “normal” again. I’m enjoying my life and losing weight at the same time. Who thought that was even possible?

So, for Thanksgiving this year there won’t be any freaking out (inward or outward). I won’t be wasting any time this coming week feeling guilty about the food I’m going to eat. Food guilt just has a way of manifesting itself into food obsession. That means that without the guilt I’m free to enjoy my family without obsessing over what I did and did not consume. I’ll be free to enjoy that piece of pie I plan on eating and I’ll be free to stop eating when I’m full because I don’t have any big plans for deprivation up ahead.

Will I gain a few pounds this week? Probably, but that’s okay because if I keep doing what feels right I’ll be losing weight again in no time. I’ve learned how to read my body, it tells me what it needs and sometimes that’s a piece of pumpkin pie.

However, if I listen to my body I will never hear it beg me to go on a weird six week binge eating session hidden under the pretenses of Christmas spirit because that just feels gross.

One thought on “That Weird Holiday Guilt Eating Shame Spiral”