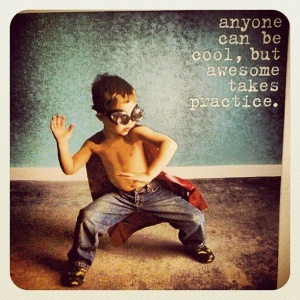 Only to find that you didn’t end up being awesome at all?

Me either, I was just checking.

Okay fine, that is exactly what happened to me this week. All weekend I was preparing for just how awesomely organized I was going to be this week. I envisioned myself jumping out of bed at 4 in the morning to go to the gym, coming home in time to take a shower and have a latte before the girls woke up to a nutritious and delicious breakfast. My house was going to be spotless, my hair was going to be shiny, all of the tasks that I had to do would be done seamlessly.

(This was obviously a delusion.)

By the time Monday rolled around I had a hard time getting out of bed. (There was no 4 o’clock gym time.) I went to the grocery store in my pajamas and shuffled through the isles trying to focus on the items I needed to buy for the meals that I had planned out for the week. (I forgot half of them even though I had a list.) As the morning progressed by lungs started to burn, my head started to pound and I couldn’t stop shivering.

By noon I was in bed under quarantine.

The next day my refrigerator crapped out. All of the stuff I bought for meals was rotting in kitchen. 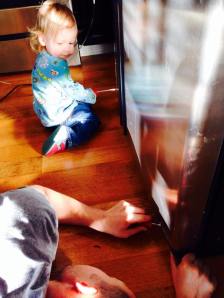 Brent and Penelope did some investigating to see what was wrong with it and quickly decided they needed to call in the professionals. We ended up throwing almost everything out. Then Bridget came home and wanted to donate canned goods for a food drive her school was having so we let her clean out the pantry while we were at it. Then we realized we didn’t have any food and I was too tired to do anything about it. I don’t even remember what we ate. I mostly focused on slurping down my sleepytime tea.

So, when I stepped on the scale today and it said 185.6 I wasn’t really sure what to think of that. I’m telling you, the more I eat the more I lose.

Yesterday at two o’clock in the morning my body decided that it was tired of lying in bed and insisted that I stop sleeping stat. I tossed and turned for about two hours as my mental “to do” list propelled through my mind  reminding me of all of the things that hadn’t gotten done while I was sick. I couldn’t get my brain to shut off so I finally got up, made a cup of coffee and wrote everything that I needed to do down.

I knew I would be too tired to actually accomplish any of it but it felt good to get some things off of my chest.

Shortly after I decided to send my dad the message that I had made for him for his birthday because he was the only person I knew that would be up. Only things got awkward because I got autocorrected…

At first I thought it went by unnoticed and I was glad because that is a really awkward thing to say to your dad. Unfortunately, he eventually caught it. It reminded me of the time I was watching the men’s world cup with my friend and her dad when we were in Jr High. As we were watching one of the matches I wondered out loud…

“I wonder how big their balls are.”

Then I realized what I said and I tried to clarify…

“Uh… I mean, I wonder what size balls they have.”

It has been confirmed. Internally, I will always be that awkward 13 year old girl.

Speaking of awkward young girls, I’ve got a Christmas sleepover to prepare for! Since I was feeling better and the house has been disinfected I told Bridget she could have a few friends over to decorate cookies, watch Christmas movies and do festive manicures. Yes, I’m insane. She was so excited this morning, she even made invitations. Even though technically they had already agreed to come.

While I was out restocking the refrigerator (and the pantry) today I stumbled upon some white cotton candy. I decided to recreate the scene in Elf where he’s sitting in the Dr.’s office for a paternity test and keeps eating the cotton balls. So, now I’ll spend my afternoon rolling up cotton candy to make it look like actual cotton so that a bunch of preteens and gobble it down while they watch the movie. 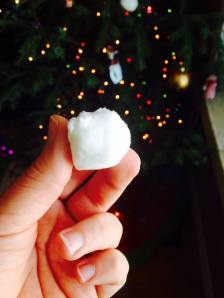 Hopefully, the only balls these girls will end up talking about will be the one’s on Elf.

Okay, seriously I give up. Hope you have a great weekend.

***As I typed this blog post I received the news of the shooting that took place at Arapahoe High School (a whopping 15 minutes away). Our thoughts and prayers are with the families of the victims. Hold your dear ones close and cherish the time you get to spend with them this holiday season. ***