I made it…I survived my first week of student teaching.

I had been losing sleep over this inevitable milestone for a while. I was mainly worried about my first day because Brent was going to be at work, meaning I was in charge of getting the kids ready, packed up and dropped off at the babysitter all by myself. I’ve been used to leisurely mornings for the past two years so I was a bit out of practice.

My friend Andrea knew I was feeling anxious about it so she offered to watch my kids for me. So on that fateful first day I found her on my doorstep at 6:20 armed with a latte and healthy homemade blueberry muffins that she had made. 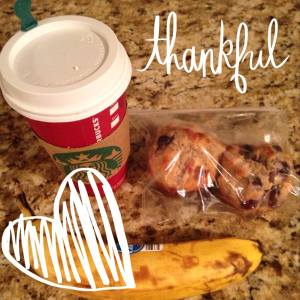 …oh and a banana too!

This was the most beautiful gift because it meant that I got to spend my morning cuddling with my girls instead of rushing around trying to get them ready for the day. 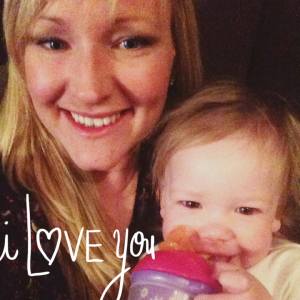 I didn’t even have to get the kids dressed or feed them anything. She just took my sleepy eyed, pajama clad girls to her house  where she fed them breakfast, got them ready for the day and kept them entertained. All while sending me texts with pictures and leaving me notes  so that I knew all of the fun things they were doing. Isn’t she unbelievably sweet?! I felt like the ultimate taker, but she insisted… so I took 🙂

I just have to take a moment to say that I am unbelievably blessed in the friendship department, always have been. Sometimes I don’t know what I’ve done to deserve such good friends because they exceed all friendship expectations. I am constantly being one-uped in the nice department.

The rest of the week was sort of a comedy of errors. The next morning I was dressed for success until Penelope head butted my coffee mug… while I was drinking it. Which required a last minute costume change. Then at the end of the day when I got in my car to go pick up the girls it wouldn’t start. The battery was dead. Brent was in the mountains so Andrea had to come to the rescue… again.

While I waited for her to come help me I sat in the parking lot grading papers hoping that my toes wouldn’t freeze. 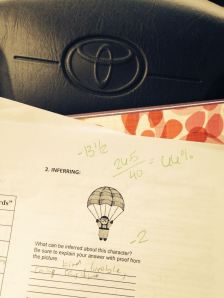 That’s when Andrea and I gained a knew skill called The Art of Jumping A Car. Only I’m not so sure we actually did it right because it turns out my battery just had a loose connection. Meaning that it wouldn’t start several occasions throughout the week.  So there were several times when I would have to hop out of the hoopty (dressed in my best professional garb), open the hood, jiggle things around and hop back in. All while my middle schoolers watched me and made fun.

Why didn’t I just tighten the connection? Because jiggling stuff is about as far as I get with automotive skills.

There were other things that went wrong and put me in embarrassing situations but that stuff’s not important.

What’s important is that none of that stuff even mattered. You might think that all of these mishaps would have made me grumpy but they didn’t. I had a blast! I was just so excited to be doing my student teaching. The kids were so much fun, the staff was super nice and supportive and I knew that I was in the right place.

I have a feeling as time passes my morning routine will eventually iron itself out.

Since I have to be at work around 6:45,  it has been confirmed that there is no way in hell I’m going to be able to go to the gym in the morning, shower and have the kids ready for drop off. This realization hit me on Thursday when I realized that the only way to be ready on time even without working out called for a 4:30 wakeup time. So, I’ve decided that I have to go to the gym on the nights that Brent is home from the firehouse. I refuse to miss out on more time with my girls during the day.  That means I’ll have to go to the gym after I put Penelope down for bed around 8:30. I’m going to be tired but I get crazy if I don’t workout so I’m just going to have to suck it up.

I’ve also realized that not only do I have to pack my lunch every day but I also have to pack my breakfast as well. Otherwise, I don’t have time to eat. Plus, I learned that there is no time for snacking throughout the day so both of those meals need to be filling. 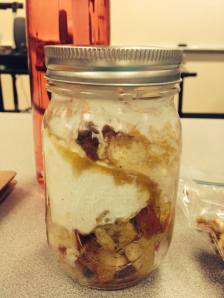 A chopped apple topped with greek yogurt, with cinnamon and a little bit of natural sugar sprinkled on top.

I also brought a little bag of Kashi cereal to sprinkle in there as well. It was so filling and got me through those long mornings. It didn’t take long for it to become my go-to move. For lunch I packed lots of  Kale salads and left overs from the night before.

I didn’t end up making any of the dinners that I had planned ahead of time. We ended up eating a lot of meals with beans for some reason. This ended up being a painful decision after a few days…

Which begs the question… when do teachers find time to pass gas? They never have privacy!

The school won’t even give me a key to the teacher bathroom so every time I have to go I have to ask another adult for permission which is AWKWARD.

Bridget loves beans so one night she really wanted to eat the left overs for dinner. I let her because it was a busy night but I refused to eat them myself for fear of what might happen during class the next day. I was too exhausted to make myself a different dinner so I ended up having a glass of wine and a chunk of dark chocolate. Then I passed out face first on the couch. I’m pretty sure I drooled a little.

To sum things up…  my mind and body has been through the ringer this week. There is no telling what the scale is going to say tomorrow during weigh in.

And yet, I already have another week to plan for…

I want to thank you all for the well wishes I’ve received as I go through this transition. I just want to ask you to hang in there with me as I figure out when to do my blog posts. I’m hoping to get into a rhythm of three posts a week again. I just have to figure out when to squeeze it in…

***Do you work full time? If so when do you squeeze in your workouts?***