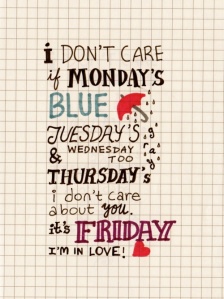 I’m just sitting outside with a homemade cup of iced coffee writing this post while avoiding the mess that awaits me as soon as I step foot in my house. Penelope and I have been alone for the past three days and it looks like a toddler bomb went off. I’ll clean one area and while I do that she’ll “explore” another area. Then when I go to clean the mess she just made she’ll go and undo everything I had managed to accomplish… and so goes the cycle. It’s maddening.

That’s why moms have book club. By the way did you see the trailer for Fifty Shades of Grey? I didn’t either… that’s filth. I would never be caught out in public watching such a film.

I forgot how exhausting it was to be a stay-at-home-mom. But I do have to admit that it does have its perks. For instance, this morning Penelope and I got to have breakfast with one of our favorite friends KJ (aka Auntie Kake). Then we got to go on a nice morning stroll afterwards. It was awesome.

We’ve finally gotten in our summer time groove and I’m loving every minute of it! Every day entails swimming. And every time I ride my bike to the pool I have flashbacks to my own childhood. There’s something about the smell of sunblock, chlorine and fresh-cut grass… it just puts a perma-grin on my face. 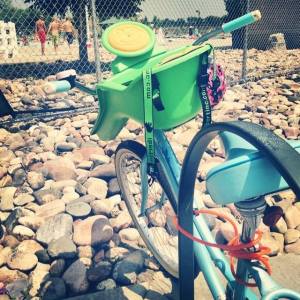 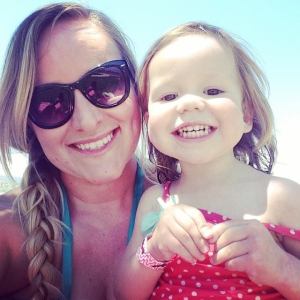 It’s always the same routine… 1) Chase Penelope around the house trying to apply sunscreen while she runs around naked. 2) Open the door and chase her from the front yard to the back yard and back around to the front where the raspberry bush is. 3) Eat all of the ripe raspberries and a few of the green ones too. 4) Load up in the bike and make our way to the pool.

5) Run back inside dig through the toy box until we find monkey and load back up into the bike so that we can finally go swimming. 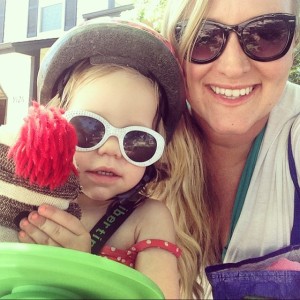 You see, Penelope and monkey have a history together…

He just can’t be left behind.

Yesterday we managed to play at the pool for about an hour before a huge rain cloud started to descend upon us. I could hear the thunder rumbling from a distance so I packed up all of our stuff. By the time I had unlocked my bike the rain started to come down and Penelope was giggling uncontrollably. I started off pedaling as fast as I could but got lured into the moment and slowed down. I could feel the heat radiating off of the asphalt as the cool rain hit my skin. It brought me back to all of the times when I would play in the rain as a kid. When we got too cold we would lie down on the warm concrete of my dad’s driveway and squint up at the sky while we absorbed the heat. It was so comfortable, like a big warm hug on a cold winter day.

By the time we got home I was tempted to make another loop around the block but the lightening had made an appearance so we went inside and got ready for nap time instead.

Later that afternoon I was reminded that I am indeed an adult and not a school girl on summer vacation. I got a phone call from the school where I was offered a long term substitute position to see if I was still interested. Instead of starting mid-September like we had discussed they want me to start mid-August. I was torn because I have one last job interview this Monday for a part time position at two middle schools that are located near/in my neighborhood. I have no idea which job I’ll end up getting. Either way, my summer is quickly drawing to a close and so is my time as a stay-at-home mom. I’m super excited and super sad all at the same time.

I’m a little nervous about not knowing which job I’ll have but there really isn’t much to do about that for now so I guess I’ll just keep living it up Sandlot style.

So far this week the only exercise I’ve had has been in the form of riding my bike and chasing my kid around. I’ve finally broken out of my funk from the surgery.  Now all I have to do now is clean things up a bit. I need to establish some sort of work out routine and brave the scale to see where I am. I also need to get over the fact that my kitchen is the hottest room in the house when it comes to dinner time and start cooking again. The basil in my yard is thriving so I’ve been living off of bread coated in cheese, tomatoes, basil and balsamic vinegar. I’ve also been washing it down with wine because that just seems like the right thing to do.

We’re going on vacation next week for a family reunion so I decided not to weigh myself until I get back. Then I’ll see where I’m at and establish better habits. Then this will become a weight loss blog again and you won’t have to endure so many garden posts while I avoid what’s really going on.

Do you ever feel like you just need a health do-over? What are your go-to moves for starting fresh?