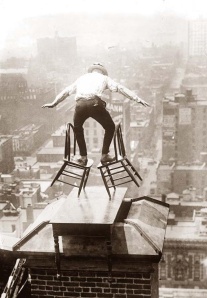 I feel like I’m getting my balance back ya’ll!

It’s been a long time coming. The past two weeks I’ve worked 12 hour days while battling the cold from hell. I also managed to share that cold with my entire family. This nasty cold seemed to result in some strange behavior at our house. During nap time Penelope ended up having a conversation with a dolphin in her room. She was super snotty and beyond tired so Brent was sure she would sleep well. This was until he heard her screaming in her room.

Brent walked in to check on her and found her looking in the corner. Brent asked her who she was talking to and she said, “Dolphin.”

“Why are you yelling at dolphin?”

She seriously doesn’t like it when people tell her what to do. I’m pretty sure this frustration was meant to be aimed at Brent and I because we are constantly telling her she needs to listen. When she yells at us she gets put into time out, but when she yells at a weird dolphin in her room we laugh. It’s a win, win situation if you think about it. You get out all of your frustrations AND you get the attention you were seeking.

I should try this tactic in my classroom.

Having a mutant cold at the beginning of your first year of teaching could very well kill a person. One night during the week I felt so miserable that I couldn’t sleep. Finally at midnight I gave up trying and busted out the laptop. I planned and graded until 2:30 and was up at 5:30 the next morning.

Each evening when I got home from work I felt like I was going to collapse, but I missed the girls so much that I always looked forward to bedtime when I got to read stories and bath time when I got to play with bubbles. Except for one particularly rough night… 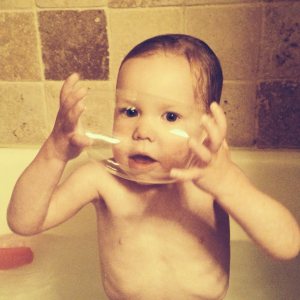 That night someone pooped in the bathtub before she could get her hair washed and then while it was getting cleaned up proceeded to run around the house naked with a towel on her head screaming “I’m Batman! I fly to the moon!”

But it very well could have been if I just so happened to drink as much wine as I was tempted to drink that particular night. I was on day two of Brent being at work and was at my whits end. Poop in the tub was the thing that almost through me over the edge.

For the past two weeks I’ve been waiting for this darn cold to go away so that I could have the energy to do everything I needed to do during the evenings. I hardly cook anymore, I’m too tired and Penelope is too crazy when I get home. Last weekend I couldn’t take it anymore I was convinced that the only thing that could ease my aching throat was some old fashioned chicken noodle soup. Real soup. Not the canned kind.

I didn’t have a recipe but I had a garden full of goodies so I went outside, picked some carrots and herbs and set to work in the kitchen…

Doesn’t the carrot on the left look like it’s saying, “No! Don’t eat me!”?

I sauteed some veggies, reduced some wine, poached some chicken and ended up making the best soup I’ve ever had. While I was out in my garden I was wading through mounds and mounds of rotting apples from my apple tree. I kept feeling bad for the apples that never got eaten. So I decided to pick a few… 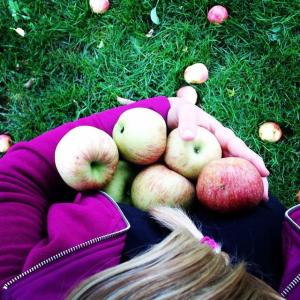 It was the first fall like day of the season, a perfect day to make apple crisp with the girls…

Slowly as the week progressed things started to get better. I caught up with my “to do” list for work and I was finally beginning to feel like myself again. This meant more energy to frolic outside during the evenings with the girls. We went on bike rides and hung out in the garden some more. Penelope was super excited to see that the pumpkins in our pumpkin patch were ready to be plucked.

She played with them for the rest of the evening because they were her “best friends”. She even invited them to come inside to watch a movie and eat some popcorn. They politely declined.

But that didn’t stop her from cuddling with them until the sun went down.

This weekend I feel like I’m finally back to my self. I’ve been looking up healthy recipes, planning which days I plan on running and getting super excited about Fall. Balancing the whole work life thing is harder than I thought it would be but I’m pretty sure, with practice, things are going to be great!

One thought on “There’s a Dolphin in My Room!”