This week was crazy. As a 7th grade Language Arts teacher there are four times during the school year when I have to grade a massive project and this was one of those times. I kept taking pictures throughout the week in the hopes that I would have time to write up a quick post but it never happened. Instead, I opted for reading “If You Give a Moose a Muffin” and making greek-yogurt-blueberry-muffins with Penelope.

For the entirety of the week my friends hadn’t heard from me, my toddler cried when I went to the bathroom because she thought I was leaving for work, and most of my morning workouts had been replaced with early morning grading sessions.

That being said, I have still managed to sneak in a few workouts. One afternoon the weather was warm enough to hit the path for an afternoon run. I couldn’t go home to change because Penelope was waiting for me and would have flipped out if I left again. And I couldn’t change at school because… well, it just feels too weird changing anywhere in the vicinity of my students. So I changed in the Barnes and Noble bathroom. The problem is I forgot to take off my nerdy teacher glasses before I took off running. 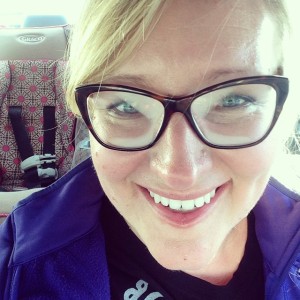 The ride home was a bit hazy.

The week started off great with a nice Sunday walk to the coffee shop. (I ordered a simple non-fat latte thankyouverymuch.) 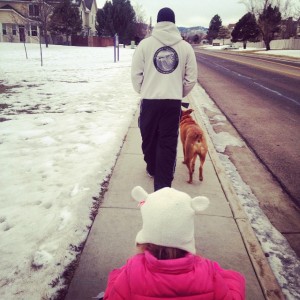 The problem is we had to pass one of my schools was on the way there. As we walked I thought about the World War II pictures I promised the kids I would bring in for the unit… and all of the grading I had to do… and all of the copies I had to make… and. Okay, I’ll stop.

So that afternoon while Penelope was taking her “rest” time I headed to work to get some stuff done. 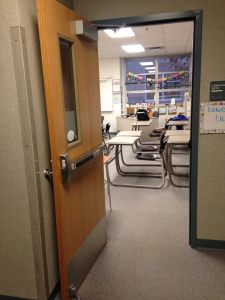 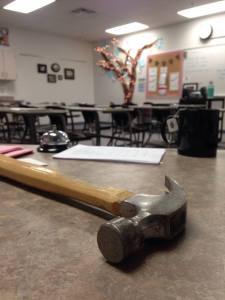 There is something about being alone in an abandoned dark building during a cloudy yucky day that makes you glad that you brought a hammer with you.

I spent so much time planning my upcoming unit that I didn’t really have time to meal plan. I did a quick peek through the pantry and the refrigerator to make sure I had enough healthy stuff on hand and called it good. Despite the fact that I was super busy and slightly stressed out I still managed to stay on track all week long. I didn’t have one pity me sugar latte, or a I’m too busy to pack my lunch burrito… not even once.

All of my hard work for the week paid off. My students love the new unit I’m teaching, my pants don’t feel like they are slicing me in half, and I got to go on a nice walk and talk with my friend around a frozen lake while we watched the sun rise this morning.

Although… there was a creeper on the path with us who just stared at me when I chirped a “Good Morning!” The trail we walked on was close to a retirement community and I’ve made several senior citizen friends over the years running that trail…

That guy wasn’t one of them.

My friend Andrea and I decided that it might be best if we just walked a tad bit faster. And I plotted how I was going to escape his grasp if he just so happened to be a psycho.

FYI: My strategy is to act bat shit crazy… When I was a teenager and was paranoid about peeping toms I decided that if someone were outside my window there wouldn’t be any hiding under the covers. Instead, I would leap to the window throw up the curtains and scream like a maniac that wants to eat someone’s face.

Nobody’s gonna mess with that.

(I’m seeing a pattern of paranoia going on here, but we’re just going pretend like it’s not weird and just go with it.)

Anyway, I digress because the hammer nor my scare tactics were needed throughout the week.

But my weight loss strategies worked so that’s pretty awesome! I weighed in 3 pounds less than last week at 203 vs. the 206 from last week. That’s down 8.4 pounds after two weeks!

Enough about me, how did your week go? Run in to any psychos? Lose any weight?