*I started writing this post last night but I fell asleep  without posting it. Then I woke up and added more. I thought you should know otherwise you might have been confused.*

I’m currently sitting in my living room watching the new Ninja Turtles movie with my husband and oldest daughter in celebration of Valentine’s Day. I’m not sure how you equate Ninja Turtles with love but to my husband the two are synonymous.

I’m not complaining, though, because I do have to say that after ten years of marriage my husband has somehow turned into super husband. He just keeps getting better and better…

This previous week I had to work late again for more parent/teacher conferences. I was exhausted this morning when I woke up to the sound of Penelope chirping in her room. “I’M READY TO GET UP NOW!”

I was expecting Brent to have already left for work and was prepared to spend my day off of work alone with the girls. I shuffled into Penelope’s room with one eye still stuck shut, abiding by her demands with mumbled grunts.

I was sitting on the ground taking her pajamas off when from the corner of my eye I saw something crawling into her room. It was my husband… scaring the shit out of me. (It’s his love language.)

He had taken a vacation day but didn’t tell me. He woke up early and got out of bed like he would any other day that he was going to work, but instead of going to work he went out and got roses, coffee and heart shaped donuts. It was super cute. 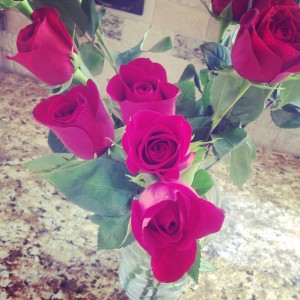 We spent the morning cuddling then later Brent and I took the afternoon to ourselves to go on a date. It was the perfect day…

We came home early to spend the evening with the girls. After I had gotten all snuggled up in my pajama pants I picked up my phone and found Brent and Bridget huddled in the corner giggling. It didn’t take me long to discover the text message they had sent to my sister. It was an exclamation about the awesome poop I had just taken, picture included.

Eew! What weirdos! (I’ll spare you the photo.) I don’t even want to know where they found the picture.

Needless to say Brent’s surprises had distracted me from the fact that it was weigh-in day.

My tactic of weighing in first thing in the morning after emptying my bladder, butt naked was kind of forgotten. Instead, I weighed in after indulging in my heart-shaped donut. (not helping…) I weighed in at 201.8, last week I weighed 202.2.

To be honest this didn’t surprise me. I was really sick for the majority of the week with a super cold that had kicked my butt. I wasn’t very hungry all week, but I also was not in the mood for working out. I almost went to the gym but I couldn’t find my ear buds so instead I threw a fit and passed out.

Brent was away at work for three days last weekend, so it was just me and the girls. I had mustered up just enough energy to make some homemade chicken noodle soup and was spent for the rest of the weekend.

Worth it… I ate it all week long.

It was beautiful outside and I was so upset about not being able to go outside and play with my kiddos. Bridget ended up taking care of Penelope for me so I could rest and I couldn’t help but feel my heart swell up when I heard how excited Penelope was for the picnic Bridget was preparing for them. Later I looked out the window and saw them lounging on blankets in the grass giggling together and reading books. It was too sweet.

My plan was to try and sleep and get well, but for some reason every time I lied down for a nap the inside of my throat would start to feel like it was made of velcro. So instead of sleeping I watched travel channel adventures and pinned healthy recipes for when I actually had the energy to go grocery shopping again.

Here are a few of my finds…

Healthy and Delicious One Bowl Meals

I was pretty much craving anything kale or soup related. I think my body was trying to find a nutritional solution to my dilemma.

I slowly started to feel better as the week progressed. Due to testing and parent/teacher conferences my schedule was a bit off. I had to spend a couple of evenings at school but I also found myself with a free afternoon. Bridget still had to be in school but the rest of the family headed out to the Littleton Museum to see how the animals were doing. 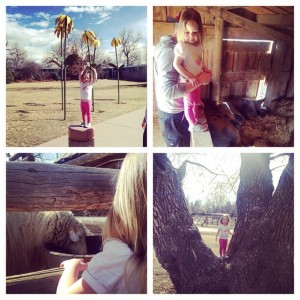 We even ventured out in out garden for a bit and were excited to see that it was already starting to come back to life!

The chives, green onions and lady bugs are starting to make their appearance!

This nice weather keeps reminding me of the summer days that are looming ahead. I CAN’T WAIT! It’ll be here before we know it. I keep telling myself I need to get my shit together so that I can show off my toned legs when the time comes. (For the record they aren’t toned yet… but they will be.)

As for now I need to hurry up and finish writing up this post. We’re going car shopping! It is time for Black Beauty to retire. We bought her ten days after we got married. I didn’t know just how much of a time capsule she was until I cleaned her out… 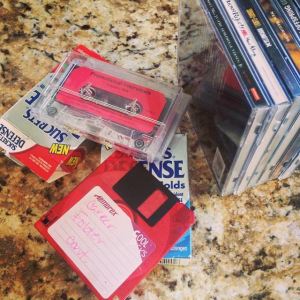 Now I have to try and get cleaned up in an attempt to look like my former self from ten years ago. As Bridget pointed out, “Mom! Look how young you guys looked!”

Look-ed? What is that supposed to mean?

Bring on the kale, the sunshine and those toned legs! I’ve got to represent ten years well lived!