I don’t know what happened, one minute I was dying a slow death, zombie walking my way through the work week, and the next thing I knew it was Friday. When I woke up that day my cold/flu was gone and the sun was shining.

I came home from work to a sparkling house, dinner on the table and a bouquet of flowers…

Brent was heading back to the mountains the next day and was trying to boost me up since I had been feeling so crappy.

The next day I couldn’t help but take advantage of my new-found health and the weather. So, first thing in the morning the girls and I went on our first hike of the season. 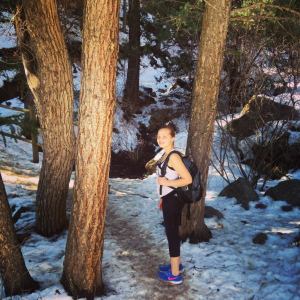 The melting snow was rushing down the mountain in rivulets and streams. It was the sound of Spring making it’s arrival known. In just a few months we’ll be sticking our toes in the water to cool off.

The hike took two hours but we still hadn’t had our fill of fresh air. So, when we got back home we continued to play outside. I ended up prodding through my dilapidated garden only to find that some of my flowers and herbs are already trying to make their appearance.

Oh yeah… and the weeds too.

I spent the rest of the afternoon pulling weeds and clearing out last year’s dead stuff while my little gardening partner kept the lady bugs and worms entertained. 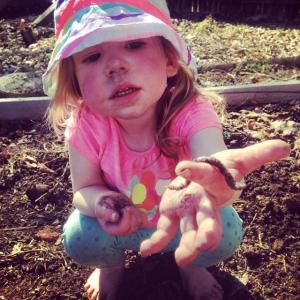 We were both filthy and exhausted by the time we were done.

We had Bridget’s swim meet to attend, 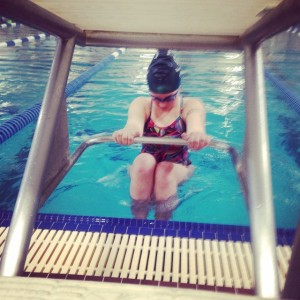 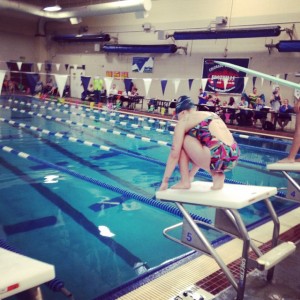 and Brent’s St. Baldrick’s fundraiser to go to.

I don’t know what it is but this spring weather has really kicked my motivation into gear. I just want to spend every moment I can playing outside and all I want to do is eat fruit and vegetables out of my garden.  Spring break is only a week away and before I know it it will be Summer.

In my first year of teaching I have managed to snag another higher paying job for next year. But I’ve also managed to lose all of my muscle mass. I’ve been pinching the skin where my biceps used to be and I kind of want to cry when I look at the lumpy skin where my quads used to shine.

I’m feeling really antsy for that time of year when I can read books for fun and run when the sun rises. In the mean time, I’ve really kicked my diet into gear. When I weighed in this morning I weighed in at 198.2 four pounds lower than last week and 13.2 pounds lighter than my first weigh-in after Christmas.

I’ve decided that I am going to lose at least twenty pounds by the time school lets out at the end of May, and an additional 10 pounds for the fourth of July.

I need that internal competitive process in my life right now. It always feels exciting knowing that you are challenging yourself. I love the feeling you get when you see the changes happening before your eyes.

I hate this about me, but I’m more of an all or nothing kind of gal. I’m either all the way in or I’m half-assing it. Frankly, I’ve just gotten really bored with where I’m at so it’s time to make a change.

Something just clicked for me this week. Maybe it was the weather, or maybe I was just sick of being sick. But for some reason I woke up one day feeling more motivated than I’ve felt in a long time. I’ve got that gut feeling, the one you get when you feel like a fire has been lit from the inside. I know that feeling well, it’s the feeling I get when I’m about to conquer something. It’s not something that I can fake or summon, it’s just something that comes around every now and then like a wave. It will eventually ebb away so I have to grab onto it and take advantage of it while it’s here. And that’s what I intend to do.