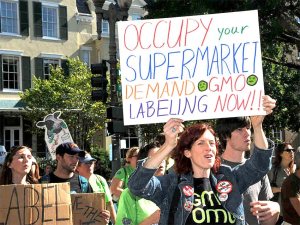 Well folks, it appears I’m going to have to grow out my armpit hair and wear Birkenstocks (with socks) because I’m going granola on this bitch.

I’m a fairly laid back kinda gal so I never really buy into anything too quickly. It takes quite a bit to get me to join a bandwagon but the more I research healthy eating habits the more scared I get.

… this only names a few.

What the heck?! If I can’t simply buy stuff from the grocery store and feel confident that I’m actually getting what I paid for then what the hell am I going to eat?

It’s hard enough trying to keep track of the amount of food you eat and the amount of sodium it contains along with the amount saturated fat it might have without having to worry about the amount of toxic crap you might also be eating.

I really wish I could just bury my head in a hole and pretend like I had never heard a word of this.

During this weight loss process I’ve gone on and on about how I have PCOS a hormonal issue that makes me fat, grumpy, pimply, depressed and… well, gross. I’ve done tons of research on PCOS trying to figure out what the heck is wrong with me. What I’ve found is that the medical community is still a little stumped by this “new” phenomenon because in truth it has only recently been given its own place in the diagnosis world.

They don’t know what causes it but I’m wondering if it isn’t due to all of the processed foods we eat as Americans.

Because of this Brent and I have decided to cut out processed foods and only eat meats and dairy that haven’t been treated with any hormones or antibiotics.

This isn’t cheap. In fact, my wallet cries…

Let me give you a little back ground on how cheap I am. I drive a 2001 Toyota Camry that has over 200,000 miles on it. It’s a looker with a dent on this side from where two firefighters got into a wrestling match over who would sit in the front seat AND the driver’s side door handle has been broken off due to a too strong dude (my husband) forcing it open when it was frozen shut in the mountains. My husband has been dying to get me a new car but I would rather drive a hoopty than have a car payment. These little choices have led to me being able to stay home with the girls a little while longer.

We had been toying with making these lifestyle changes for a while but really struggled with how expensive it was. Plus, I would really like to pretend like I didn’t know Cheetos were that bad for me so that I wouldn’t feel so bad about indulging every once in a while. We would start, only to back off due to the price of this lifestyle. Then I would stumble upon something else I didn’t know about and get scared into doing it again. All of the signs keep pointing to the fact that we can’t just simply keep turning a blind eye and eating the stuff we grew up on simply because change sucks.

It’s so sad, what kind of world do we live in that it’s not safe for a kid to enjoy Doritos with their peanut butter and jelly sandwich?! (look at the GMOs in your snack list)

It’s not a matter of buying into all of the hype. It is more about investing in the well-being of our family and our health, short-term and long-term. In other words… we’re going granola.

My friend Andrea was on the ball much sooner than I was. In truth, I always envied her resolve but also found it to be a bit weird at the same time. “What? You’re not going to eat that chip? Are you even American?” Now as I’ve stumbled upon all of this new information I flood her with questions on how she does it. That’s when she lent me her book, “Food Rules” by Micheal Pollan. 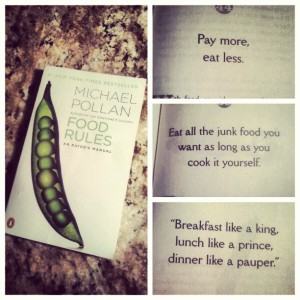 I read it one day during Penelope’s nap time. After getting through the first chapter you just fly through the rules that he provides for you. I have to tell you, it all makes sense.

Andrea has been following these rules for quite a while and I always wondered how she managed to bake goodies on the weekend and not gain any weight. I felt like she had found the perfect balance and was gracefully going through life with the secret that I would never uncover.

Now, we all know that it doesn’t matter what I read… I’m still going to be a hot mess. But it doesn’t hurt to add a little more knowledge in your arsenal Okay, so it hurts a little.

In my quest for knowledge I keep stumbling upon information about GMO’s (genetically modified organisms). The more I read about it the more I feel like I’m in a bad science fiction novel. This stuff truly scares me. I didn’t even know what a GMO was a year ago.

Recently my friend Tony informed me of a protest that is to take place in Denver against GMO’s. I keep asking myself if this stuff scares me enough to pull me out of the suburbs to participate in a protest. 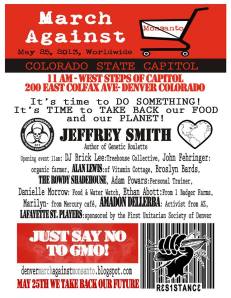 Honestly, when I first saw this flyer my first thought was, “Good I won’t have to worry about this for much longer because other people will take care of the problem for me.”

(What? I didn’t get overweight by being proactive.)

However, there is a big part of me that really wants to go to this. I’ve never been to a demonstration because I tend to be a pacifist. I don’t want to take the kids with me because Penelope is a teething nutcase and my odds of going depends greatly on Brent’s schedule for that day but the more I think about it the more I want to be there.

There is no telling if I’ll actually make it or not. If I do go I won’t be wearing Birkenstocks and I’ll probably shave my armpits  because I was only kidding about that earlier. Regardless of whether I go one thing is for sure… Granola’s got a whole new look to it that includes strollers, yoga pants, and a little bit of suburban house wife swagger.

What do you guys think about all of this stuff? Are you going to do the march in your area?