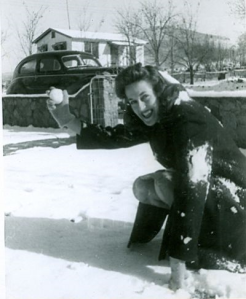 This morning was spent throwing snowballs at the noisy crows who decided to have a party in the tree outside of Penelope’s window during nap time.

The snow was too powdery to make a sufficient snowball so after the fifth snowball disintegrated in mid-air I gave up and transitioned into a weird silent arm waving dance… it was very tribal and interpretive.

It didn’t work either.

Then I looked across the street and saw my neighbor staring at me. It was the same neighbor who lent me his ladder when we first moved in so that I could break into my own house wearing nothing but a bathing suit… in November. (It’s a long story that involves a hot tub and a locked door.)

When I saw him looking at me I waved and tried to nonchalantly make my way back into the house.

When I went back inside I made my breakfast fuming as those stupid crows taunted me with their incessant CAAWWW noises. I was so mad at them for being so noisy during nap time! Don’t they know that nap time was created so that moms don’t get too weird during the process of raising children?

I sat down with my breakfast and realized that Penelope had been sleeping the whole time. I was being a weirdo for no reason.

Now that she is a asleep and the crows have flown off to find new victims I am free to share what I ate yesterday… because I know you are all on the edge of your seats. 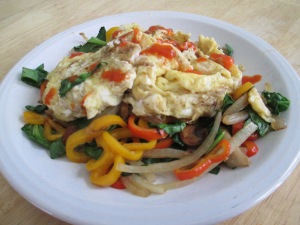 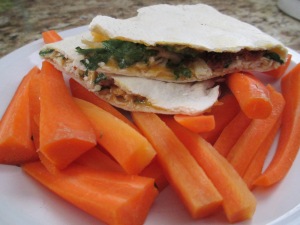 Snack- Target has a deal that if you order a grande espresso drink you get a free pastry. I got the drink, Bridget got the pastry. This deal lasts until March 3 but they aren’t allowed to advertise it. Apparently, I was the first one to ask about it yesterday and I got a round of applause. Thank you Anisha Tischer for your friendly Facebook reminder!

Dinner- Spaghetti squash topped with cooked italian turkey sausage and marinara. I added a piece of Provolone cheese and broiled it on top and sprinkled some of my beloved basil from my basil plant. 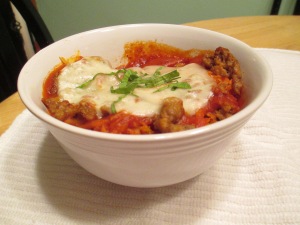 I enjoyed it but Bridget was a little ticked off by the fact that we weren’t having real noodles. She made a few dramatic gestures and declared that she wasn’t hungry. 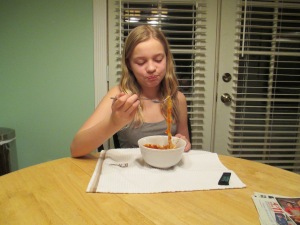 While I was looking for my food pictures I stumbled upon one of my attempted butt pictures. I didn’t post it yesterday because my mirror was dirty as was the rest of my room. 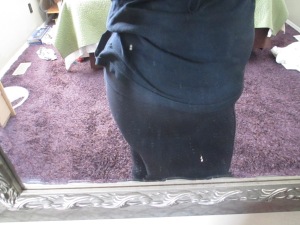 I was also embarrassed by the fact that I have done nothing to decorate our bedroom since moving in. I have no idea what to do with purple carpet! Any tips would be appreciated. Plus, I didn’t really want to post this because I couldn’t get the right angle so show off how awesome my butt looks. In fact, it is rather flat in this picture and my stomach is quite lumpy. But it is awesome… you’re just going to have to take my word for it.

With that said, I will reveal the scary weight that prompted The Veggie Challenge.

I stepped on the scale Monday morning after having been snowed in with the girls for the weekend and it said…. 211.4. YUCK! I’ve been hiding this number from you all week trying to get it back down in time for my weigh-in tomorrow.

The Veggie Challenge was the best idea ever because I feel like I’m back on track 100%.  We’ll see if the scale agrees.

I’m kind of sad because I wasted about two weeks trying to get my crap back together. I’ve decided that weight loss is only hard if you are halfway committed. If you leave room for debate the decision to make good choices isn’t always clear-cut and you end up wavering back and forth.

I’ll see you tomorrow with the results… keep your fingers crossed.