It’s the Saturday before I go back to middle school… for good.

I’m sitting in my living room pondering which movie I should choose to watch on Netflix. I’m in my pajamas wearing my old man glasses. The glasses that I picked out prior to the realization that I had gotten so near sighted that when my actual lenses were put in place I no longer looked like a hipster but like the old guy from The Neverending Story. 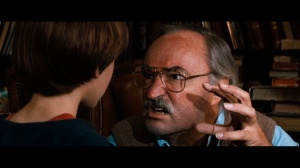 I was sorely disappointed to see my beady eyes staring back at me. I would prefer to have the opposite prescription. Personally, I think I would make a better Professor Trelawney.

(Side Note: If you don’t know who these people are you should leave.)

Here I am writing up my long overdue blog post in my jammies with a glob of toothpaste on my nose. I’m not quite sure why the toothpaste is sitting there other than the fact that I have a pimple trying to make an appearance and it felt like the right thing to do. It’s probably some puberty trick I learned back in the day when I read Seventeen Magazine. Seventeen Magazine was where I got the zit advice. Cosmo was something that my friends and I would steal from an older sister so that we could be thoroughly confused by the sex advice.

“Uhhh… they want you to stick your finger where?! Do ya’ll even know what that is?”

I was super relieved to later find out that things were much less complicated than Cosmo had made it out to be. On the plus side, I stayed a virgin for a long time due to the fact that I was completely freaked out by what I had read…

Hmmm… I’m not quite sure how I ended up talking about that. Weird.

Apparently not much has changed in twenty years. (Let’s not tell 7th grade Nina that, she would be sorely disappointed).

Anyway, Bridget is on a sleep over tonight and Brent has been at work seven of the past nine days.  I don’t mean the usual 9-5 gig, I mean seven 24 hour shifts. (He has to cover for the firefighters that were called for a wildland deployment.) This means when I get home from work overwhelmed to the max I still don’t get a break for another four hours until Penelope goes to sleep. And even then I can’t complain because Brent has it way worse than I do.

Why do you always have to be a one-upper Brent?!

It could have been worse. I was this close to being summoned for jury duty during my first week of work. That would have been awful. Luckily my number wasn’t called.

Instead, I spent this past week juggling two schools and setting up all of my classes. I teach at one school in the morning and at another school in the afternoon.  I had twice the information to digest, twice the emails to sift through and twice the staff lunches to attend. Other than the staff goodies I had been given I can’t even tell you what I ate this past week. I was too busy to eat my feelings.

Initially, I had planned on having Bridget take my monthly pictures for me last Sunday so that I could get back into weight loss blog mode. But when Sunday rolled around I realized that she was still on her Girl Scout Trip and wouldn’t be back until later. I decided it was all for the best because I wasn’t really ready to face the music. I really would rather pretend like I didn’t gain weight this summer and I’m really dreading posting my weight up again.

That being said, I can’t keep pushing it off forever. But I’m still alone and I don’t have anyone to take my monthly picture for me tomorrow. I’m tempted to do it on Monday but that is the first day of school and that’s the day I’m supposed to be taking pictures of Bridget as she makes her transition from elementary school kid to middle school kid. It seems a bit self involved to make her take pictures of me so that I can post them on my blog on that day.

In fact, I’m pretty sure I couldn’t even be my own friend if I did that.

So, I’ll just have to figure that out later. Maybe I’ll do it on Wednesday because that’s my birthday. You’re allowed to be self involved on your birthday.

But… just because I can’t take my monthly picture it doesn’t mean I can’t start making strides. My first line of business is to look up make ahead recipes that I can freeze that involve humongous zucchinis. This sucker got a little out of hand while I was tending to my classroom instead of my garden. 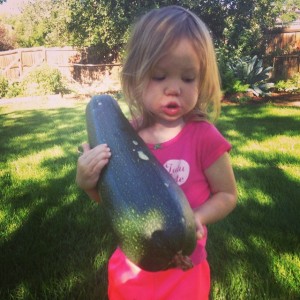 Apparently, I have a little bit of a zucchini problem… 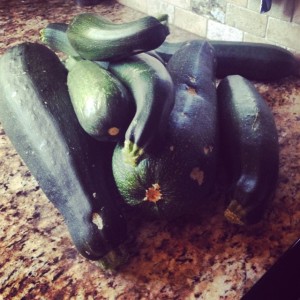 I have about ten mutant zucchinis that need to be prepped and cooked in one form or fashion… preferably in a manner that will help me lose weight.

I’ll keep you posted on how that goes. In the meantime, I’m going to go wash this toothpaste off of my nose because it’s starting to burn. Then I’m going to see if I can stay up late enough to finish a movie. I’ve gotta live it up while I can!  There is only a day and a half of summer left as far as I’m concerned.