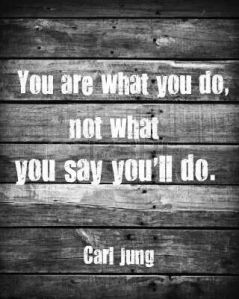 Are you guys ready for this?!

I’ve been so pumped for this challenge. There is nothing like leaping into action and actually doing the things you talk about doing to make you feel refreshed.

That being said, I did have to fight against the urge to eat like total crap for the past two days while I waited for the official start date of this little weight loss challenge. I caught myself eyeballing the fancy cakes in the desert case in the grocery store justifying why I should splurge while I had the chance. Six weeks Nina…. SIX WEEKS!

I am proud to say that my will power won the battle. That isn’t to say that I didn’t partake in a few guilty pleasure though…

Yesterday after I put Penelope down for a nap the power went out at my house. I couldn’t do laundry, or the dishes, or vacuum so I did what house wives do best… I drank wine. I had to make a few preparations for this big event and part of preparing meant getting rid of the remaining wine sitting in my kitchen and perusing through healthy food magazines. 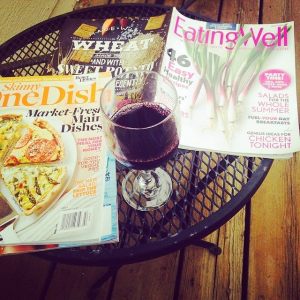 It was awesome! I had the best time sitting out on my deck and having a little moment to myself. As I sat there a chill filled the air so I ran inside, put on my yoga pants and grabbed a blanket. Snuggling under that blanket while the cool breeze hit my face was probably the most relaxed I’ve been in a long time. Not to mention this months Eating Well magazine was FULL of awesome ideas for things to eat for the next six weeks. Most of the recipes included ingredients that will be coming straight out of my garden. There were also ideas for entertaining, all of which were healthy making me feel like I’m not going to miss out on anything while I partake in this weight loss challenge.

After Penelope got up from her nap I went and picked Bridget up from school and took the girls to our favorite book store, The Tattered Cover. It was raining by this point and the house just felt creepy without its usual electric buzz.

I thought for sure by the time we got home the power would have been restored but I was wrong. Luckily, I have a gas range so I was still able to make dinner. 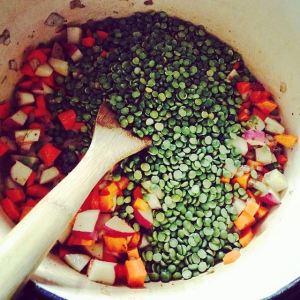 Bridget and I pretended like we were French peasants while making this meal in our silent powerless house. This looks healthy but we dipped warm buttery bread in it just to ensure the we were being authentically French. Plus I drank the remaining wine to add to the Frenchiness of the experience.

Looking back, this may not have been a very good idea because wine makes me puffy. I forgot this little fact until this morning when I had Bridget take my before pictures for the challenge. My actual camera is dead (I wasn’t able to charge it due to the power outage yesterday) so I had Bridget take my pictures with my iPhone.

This didn’t really work out… 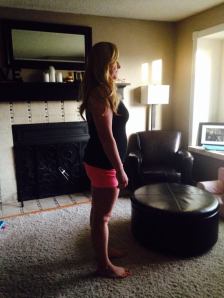 We had major lighting issues so we went out on the back deck where it was about 38 degrees outside to take the shots… It was not pretty!

Not only were my feet frozen from standing in the frost but my ego was severely bruised when I saw what I looked like in broad daylight. (No more swimsuit gardening for me!)

I had no idea I had so many dimples! I let this slip out as I looked at the photos and Bridget said, “But Mom isn’t that what your blog is all about? Showing all of your flaws?”

Hmmm… I might have to rethink this whole blogging business.

All I have to say is that there better be some major improvements by the end of this six week challenge. I weigh about what I did in October during the last time that I took pictures. The difference is that I was lifting fairly heavy and had a lot of muscle on my frame. All of that muscle has been replaced with dimply fat…EEEEWWW!

There wasn’t time to waste. As soon as the pictures were taken Bridget and I headed out the door for an early morning run.

She was getting a little jealous when I would take Penelope and Scout out for runs early in the morning. I didn’t think she would want to go with me before school but apparently I was wrong. After we got done running we headed back home where I made green smoothies for breakfast. So far everything is off to a great start!

So… I guess we’re at the part where we have to see the stats of where I’m starting in this challenge. I purposely put them at the end of this post so that only the people who are dedicated readers would see them. I’m secretly hoping that at this point you’ve gotten tired of hearing about all of my random crap and have given up hope for finding anything entertaining to read. If you’ve made it this far I applaud you… and I kind of hate you.

Beginning Stats for The Summer Shape up Six Week Challenge

(Why did I give this thing such long freakin name?!)

(I seriously debated on skipping this part, I actually had to stop mid blogging to strip down and record the results)

I haven’t felt this embarrassed in a long time. I feel like I did on that first fateful day when I started this blog. I just want to fall to my knees and scream…

WHYYYYYY?!?!? Why did I let all of my hard work slip away?

The truth is I didn’t really gain weight during my stint as a student teacher. I just didn’t lose any weight either… and I didn’t workout… and now I’m a big ball of fluff!!! UGH!!!

It has become apparent that this is a very emotional time for me. I think it is best that we end this post before it gets too weird. Goodbye and good luck with the challenge.

Yesterday I told you I would report what I ate from now until Friday during the strictest portion of the ten week challenge.

We still have family in town so it’s quite challenging. During breakfast Brent bailed on me and decided that tomorrow would be his start date and he encouraged me to do the same. I stood firm and said no. He’d already convinced me to push it back until the weekend was over. I wasn’t about to do it again.

When I first told him about the challenge he insisted on joining me. I initially told him not to worry about it because I didn’t want to get thrown off if he fell of the wagon. After all, he doesn’t need to lose weight like I do. This has happened before where we’ll vow to eat well together and then he’ll want to order something in for dinner. Since we decide to do it together I end up eating bad too because he did. After doing this over and over he still ends up looking great and I end up large and in charge. Brent is a great life partner but I really must say that he sucks as a nutrition challenge partner.

So this morning while Brent caved in and dug into another breakfast burrito I sautéed up some mushrooms, onions and spinach to be topped off with two cooked eggs. I added a bit of the left over green chili Brent smothered his burrito in as an after thought. 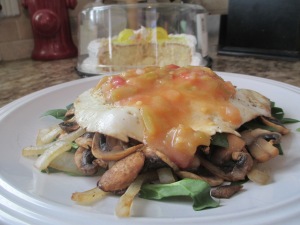 See the cake in the background? I meant to have a slice before starting the challenge but was so sick of eating crappy food that I couldn’t force myself to do it.

I also officially traded in my sugar coffee for hot tea. It’s actually really good and I had no problem relaxing with a hot mug of this stuff.

Plus, I like the tin it comes in. It makes me feel like I’m drinking something special.

My snacking style is thoroughly cramped without fruit or dairy. I kept wanting to grab an apple or eat some yogurt. I also usually carry Kind Bars with me in my purse just in case I get hungry and I couldn’t even turn to that because of the sugar. So if you have any snacky suggestions to get me through this phase I’m all ears.

The only thing I could think to snack on was carrots and humus. So I ate a handful before heading out to the mall with the family.

After walking around for a while we headed for the food court to grab a bite to eat for lunch. Brent and I went to Woody Creek Cafe to grab a few salads and iced tea. 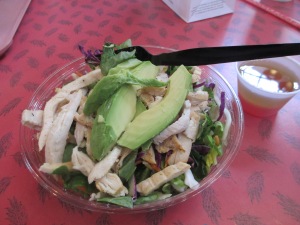 What I didn’t know was that you got a complimentary cookie with your salad when you go to Woody’s. This wasn’t much of a challenge because I’ve gotten used to passing up on cookies. But it still ticked me off when Brent went on and on about how moist and delicious it was since he was supposed to be doing this challenge with me.

I threatened to take a picture of him eating his cookie for the blog and he shoved it in his mouth before I could catch him in the act… what a butt head.

I only felt a little bit of satisfaction when he almost choked on it.

The day was going great so far. I didn’t feel deprived at all. The salad I had for lunch was really filling and I wasn’t hungry again until 6 tonight. Everyone else decided to order pizza and garlic knots for dinner.

I ate a handful of almonds while I roasted up some butternut squash and onions in balsamic vinegar and olive oil to go along with my grilled chicken. 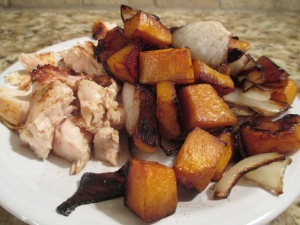 I didn’t eat it… By the time I had gotten Penelope to bed and had finished cooking my meal I wasn’t feeling so great. I’ve got a headache and am feeling a little nauseous. My plate is sitting next to me as I type this still untouched. I get migraines all of the time so I’m not sure if that is my problem or if I’m just reacting to the sudden change of diet. My bet is that I’m just a weirdo.

We’ll find out tomorrow when I go through another round…